Here's a cheap Fender neck joint. I was surprised to see is a dovetail. I even think it was glued with hide glue, cause the glue is hard, crystalized and brittle. Also thought CA but don't think that's posible. Not sure thou... I hope this turns useful or interesting for you. If to cheap or not valuable enough to post i apologize =(  Won't do it again haha. Cheers!

By the way, could anyone tell one kind of glue it has jus by looking the picture?? 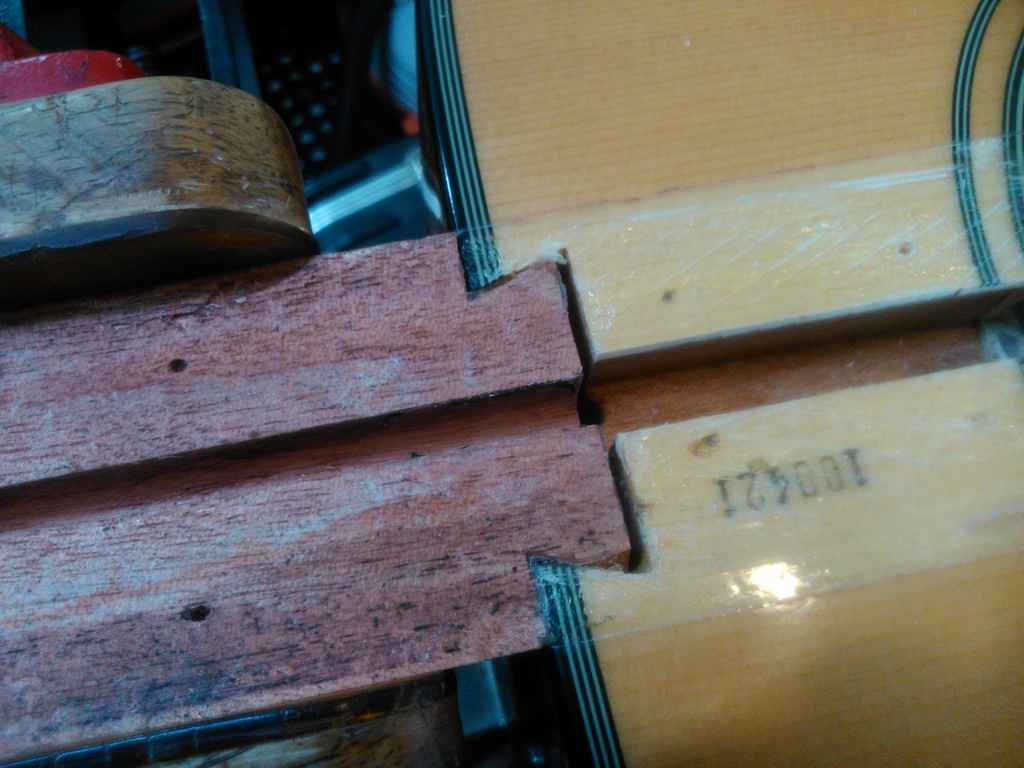 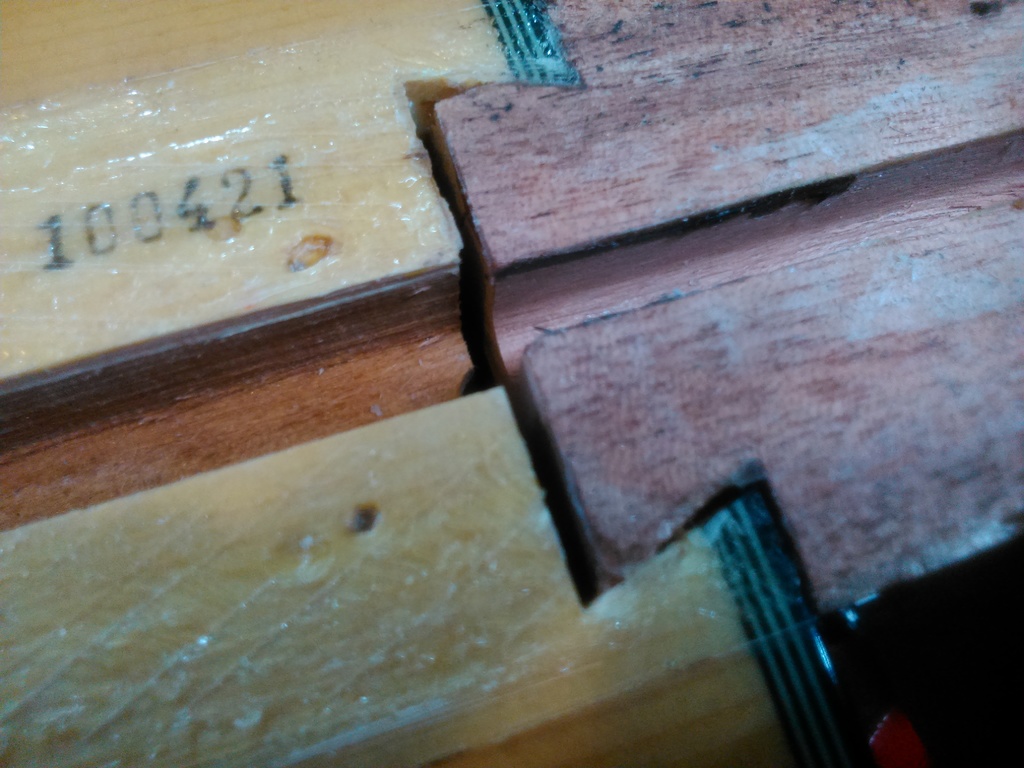 I’m looking for advice on how to properly reset a neck with a combination butt joint and horizontal dovetail under the fingerboard.  I found this post by Robert Bander from October 27, 2010 that gave me the needed insight to get the neck off.

I’ve attached a few pictures.  I pulled the 14th fret and drilled 2 steam holes and angled them about 20 to 30 degrees in toward the center line of the heel.  This wasn’t enough to loosen the joint after 8 to 9 minutes.  Pulled the 15th fret and drilled an additional steam hole, angling through the block to get into the small space below the fingerboard dovetail and the dovetail slot under the top.  Got very lucky and hit it on the first try.  The dovetail slot was cut all the way to the end of the block so I could see steam coming out through its open end and knew I was inside.  Wedged fabric to close off the open end and proceeded to steam out the dovetail in about 5 minutes. I did use a chisel to separate the heel cap from the body, and applied a little leverage to open the joint.  Then with some hand work the butt joint portion opened up.  Clamped down lightly on the end of the fingerboard and used a 6” spreader to apply gentle pressure between the bridge and end of the fingerboard while applying the steam.  This aided in easing out the dovetail.  Once apart I found that my holes at the 14th fret only got into the ply’s of the laminate sides, not through them into the thick glue of the butt joint portion.  I did a number on the laminate behind the heel though.  Lucky it never extended beyond the footprint of the heel.

Now I’m trying to get opinions on how to re-set the angle.  I know I’ll have to remove material behind the heel to drop the headstock.  But unlike a traditional dovetail reset, now as I remove from the heel, I will be rotating the fixed position horizontal dovetail up, out of the slot at the same angle.

I’m thinking I need to remove material from the top on the dovetail tenon to match what is removed from the heel.  This will raise the profile of the dovetail angles higher into the slot and could lead to final alignment issues.  So I may need to modify the slot width at the top to allow the higher, wider dovetail to be rotated up into the new reset neck position.  This modification would be easier to add a shim in the slot if I FUBAR the first attempt. Though I don’t think a perfect match is critical, I just can’t leave it proud on the high side to avoid building in an elevated bump. The fingerboard extension will be glued down

It is a nice all laminate body and will make a good first guitar for some kid when I’m done I hope.

one last picture of the depth of the slot. 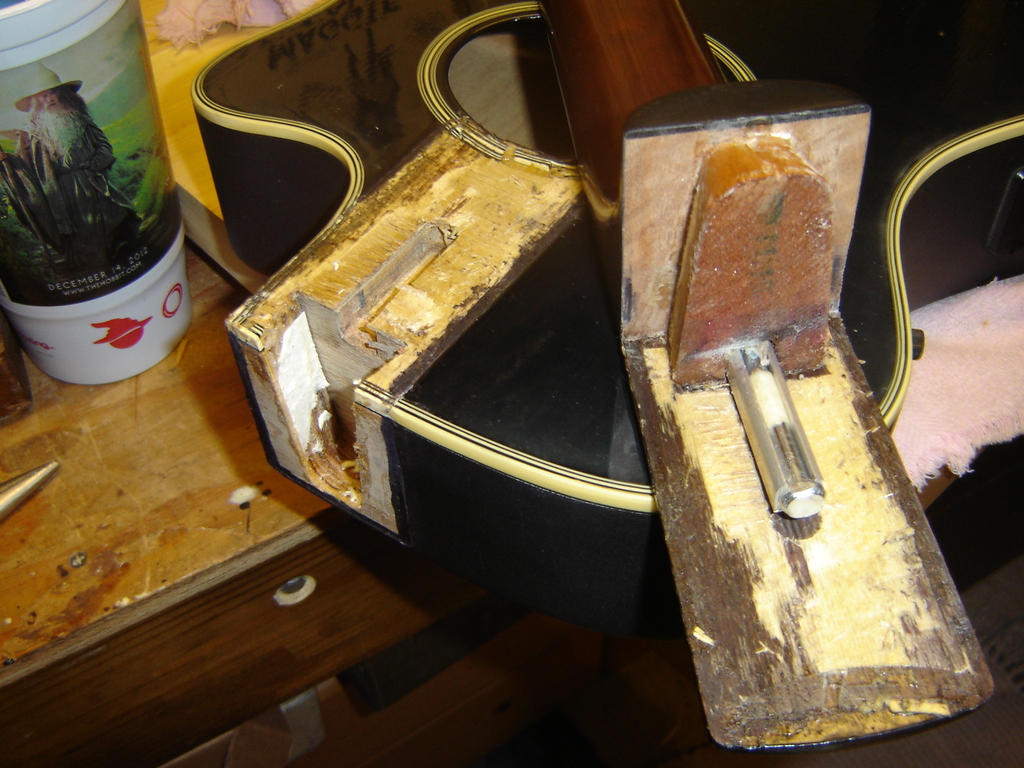 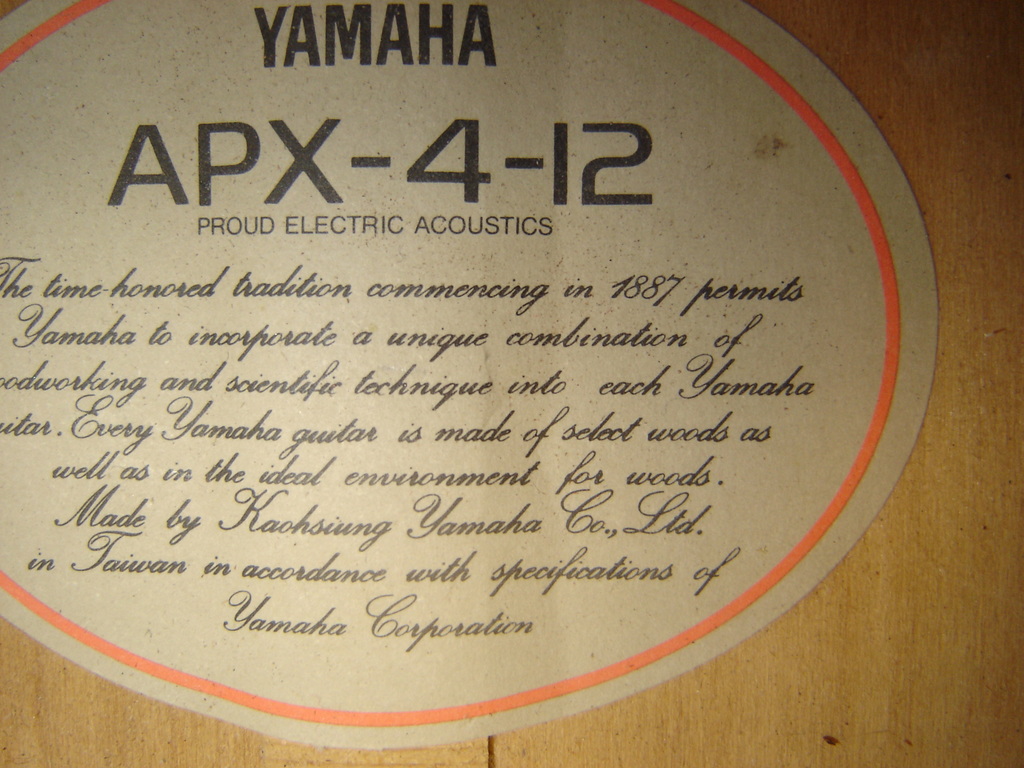 Basic dovetail set up.  Wide dovetail tenon block, so drill 1/4 to  3/8 inch in from edge, angle toward center of pocket.  First holes were to close to center and stopped in the dovetail block.  FUBAR!  Felt like hide glue in the joint.  REMOVE the long strap button screw coming into the bottom of the dovetail pocket. 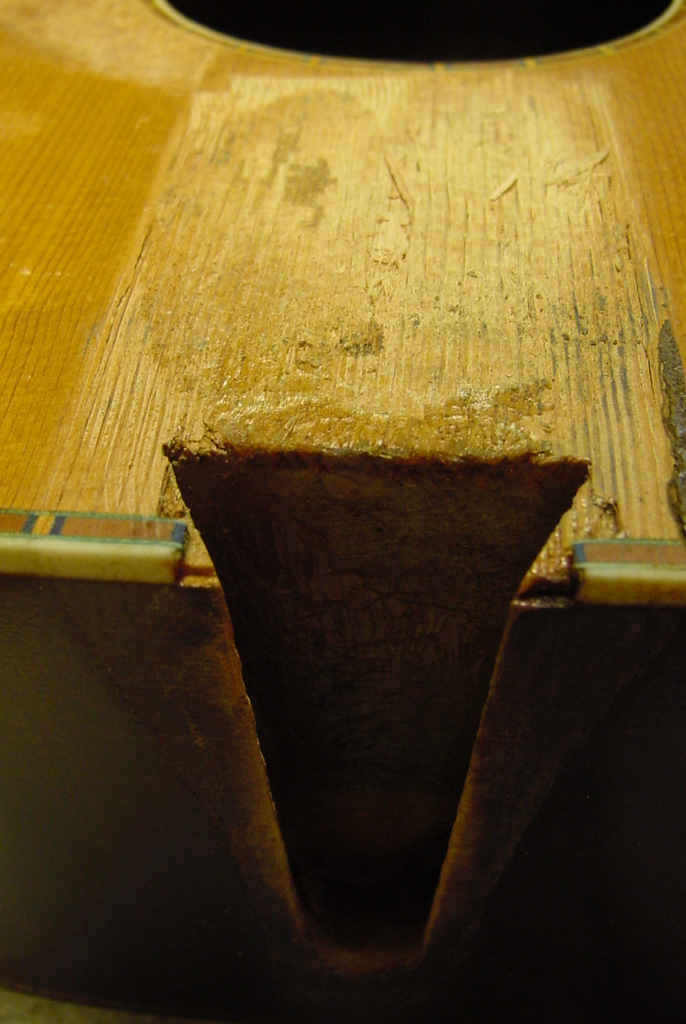 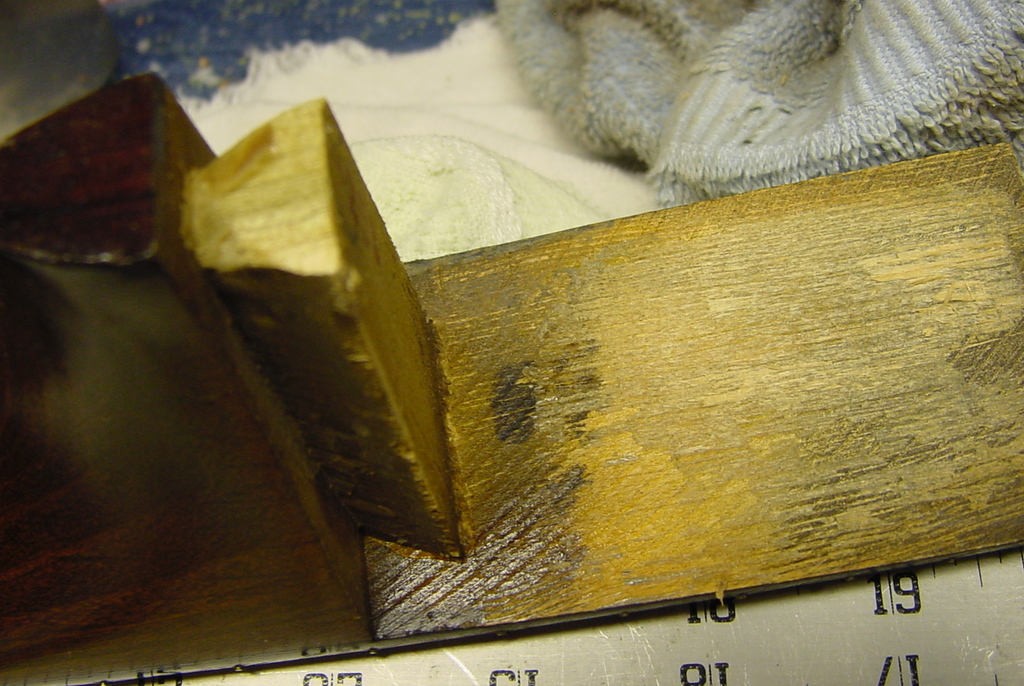 Very easy to separate, came apart with a few simple wiggles after loosening the fingerboard extension.  Assembled with hide glue.

Check out the replacement bridge someone added.  That is the spine of a comb someone added in front of that  block of oak, Yes, the intonation was "OFF A HAIR".

Here's the neck joint on a teens/20s parlor guitar labeled JW Pepper (a jobber, not maker).  It's a straight mortise/tenon joint as found on the Bauer and Bruno listed earlier in this thread, and on Weymann-made guitars, as well as the Italian luthier-made 'Galiano' guitars, too.

I first loosened the fb extension, then removed the 12th fret.  Next I sawed the fb extension off to expose the joint.  Using an artist spatula, hot water and an alcohol burner, I worked water/hot spatula into the tight joint.  After about 15 minutes, a was down about an inch, and after wiggling the neck sideways, it popped off cleanly. 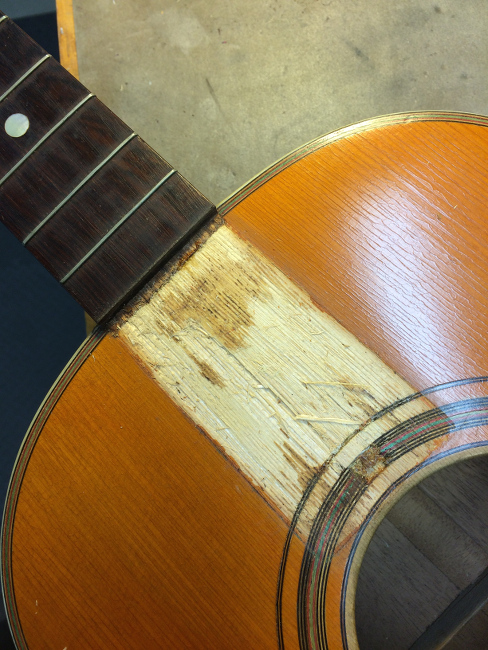 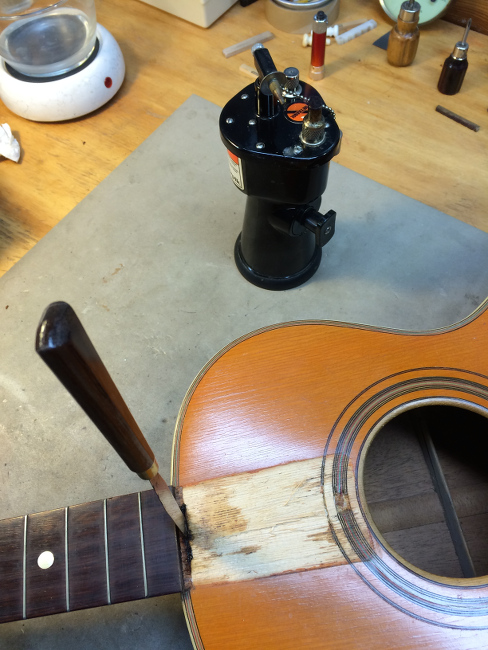 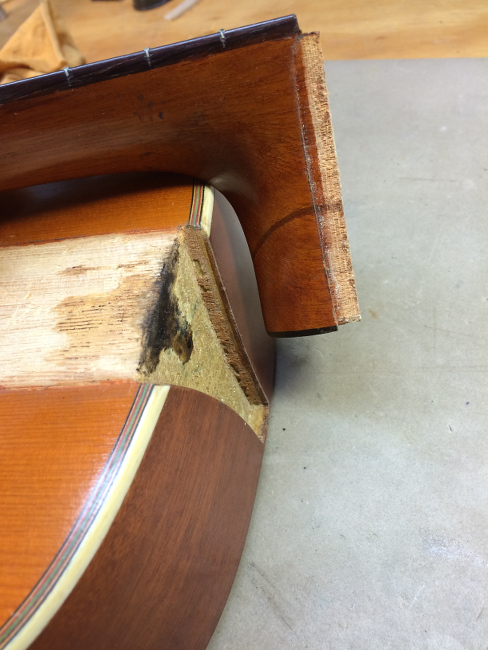 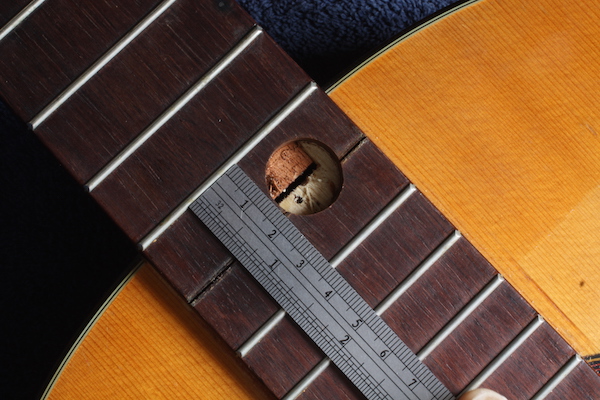 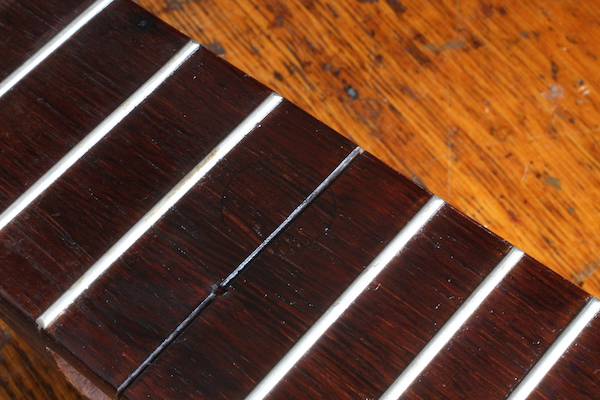 Permalink Reply by harrison phipps on February 25, 2015 at 5:55pm
Neck reset on Bruno Brazilian rosewood parlor 12 fret. Finally found a spot where pressure on the drill gave way and made me think i was in the pocket at end of dovetail. Steamed the neck off OK but was surprised when i looked at the headblock, see pic
Attachments: