So, I think the picture explains my problem quite well. While replacing the strings on my 50's era Kamaka uke, the tuner knob broke in half. I figured that they were getting weak, judging by the brown patina, but I didn't realize they were this close to destruction.

So, I need to replace these. But there is NO WAY that there are any exact replacements around, and I don't want to put some kind of new tuners on this thing - these just look right. (I'm aware of the new Waverly tuning pegs for Ukes, but I just don't want to go there.)

So - any thoughts on how to manufacture replacements? I could turn some out of corian, I suppose, or try casting some new ones. I've replaced Martin Keystone style tuners from the 50s with similar guitar knobs cut down to fit, but I don't think there is anything like that available for these buttons, although - they do look like just guitar tuners slapped on a uke. There isn't even a beveled depression for these to fit in on the headstock - just flat wood. (That was a surprise.)

If you can glue it together, thats a start, then you need to get material across the crack to strengthen it. I'm looking at a plastic pill bottle on my bench and it's really close to the right curve, if you could glue something like that over the face of the button, maybe heat it a bit to make it shape to it. then you could sand it thinner and polish it until it looks right. Or go to your local Fabrication Lab or Hacker Space and get them to 3D print one for you.

Burton LeGeyt  has a very good DIY tuner button tutorial in the middle of a doc-u-build here:

Wow - that is one intense process!

I think I will need to go the "make a silicone mold and make your own" route - it's been done, but it isn't very appealing to me, but I don't have many choices at this point, either.

http://harmony.demont.net/kamikazie.php?page=037 seems to indicate a good way to do it. I would prefer to make something from corian, but I have NO idea how I would make the final square hole for the post without destroying the whole project.

I haven't had good luck with corian in this kind of thing it tends to crumble. I have managed the square hole by drilling first and using a small square file....and lots of patience.

Get new tuners ...keep old somewhere...I was just looking at some at stewmac..

Look around at Frank's site: www.frets.com.  In one of his restoration articles he talks about using tea to stain replacement plastic to match older originals, IIRC.

Thanks Larry - all four tuners are deteriorating, so I will have to replicate them all, I suspect. It would be foolish to expect the others to keep working.

It turns out that a friend of mine worked in a dental lab in the past, and has a lot of knowledge of mold-making and how to make things turn out just right, so I'm planning on molding a set of these things. The ability to replicate tuning buttons at will might be a really nice side business...

I confess that I think these are pretty minimal as uke tuners go—the new Stew-Mac spring-tensioned ones are a lot nicer—but if you want to keep it original, I'm entertaining offers on these: 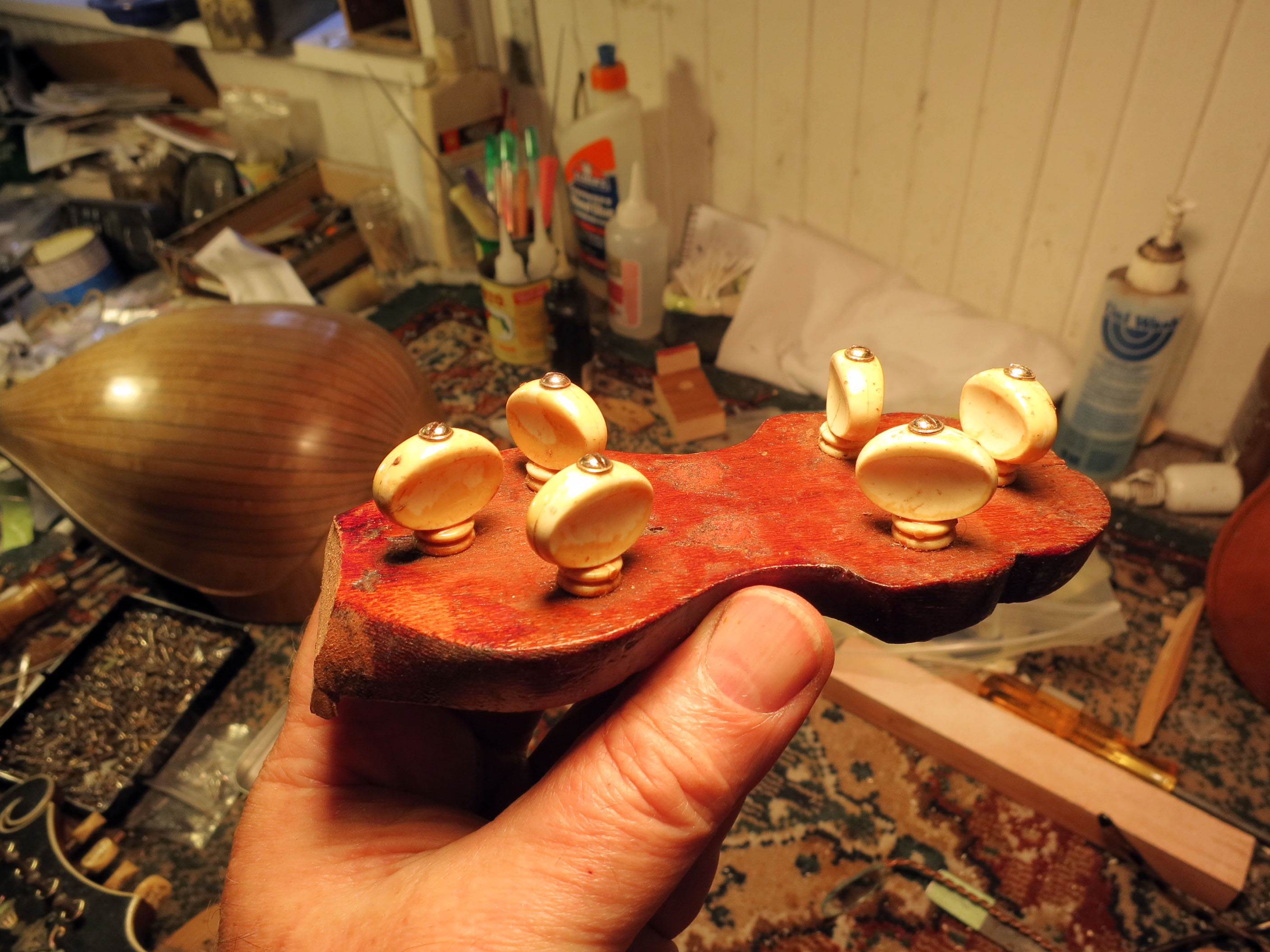 Someone slopped some orange shellac on them, which could be removed easily enough.

WOW!!!! I really want the tuners, but I'm hesistant to offer my first born - how about my second born and a Japanese baritone uke from the 60's? :)

Seriously, I'll PM you. This is fantastic!

A week and a half later, I'm still waiting for any kind of message. Want 'em? If not, I'll put them away.

I tried to friend you so I could send you a message, but I clearly must have botched that. How about I just email you.

Also, WHAT THE HECK IS THAT HEADSTOCK FROM? I've really been wondering.