Tronical Tuners - Anyone have Experience?

I just did a pro setup on a Strat with Tronical automatic tuners. In the end, I had problems with tuning accuracy and stability - after self-tuning, the guitar was +/-10 cent out of tune with my strobe tuner.

I'm guessing that the Tronicals' tuning accuracy is probably dependent on intonation and nut slot friction - intonation because it would generate confusing harmonics and nut friction because of string energy stored above the nut - consequently I spent a lot of time on both.

I used nut files, abrasive cord, and welding tip files to make sure the slot were sufficiently wide, the slot bottoms rounded, and the slots slightly slanted back towards the headstock. I lubed the slots with Teflon grease.

I checked the 2-point whammy for hang ups and used tri-oil on the two contact points. I adjusted the whammy springs to return to pitch.

I spent a lot of time on intonation. The strobe tuner had trouble with a couple of strings, flipping back and forth in it's readings.  I interpret this behavior to overtones close in amplitude to the fundamental.

After replacing the strings, I yanked and stretched until tuning became stable. I followed the Tronical directions on restringing. I also removed string tension at the nut after every manual tuning by lifting the strings.

I used the auto-winding to get close to pitch and finished tuning manually. I was within a few cents of center before I invoked automatic tuning.  I turned on he Tronicals, swept an arpeggio near the neck, the tuners whirred and clicked, and all lights turned green indicating "in tune" and then the tuners switched off. I checked this against the Strobe tuner and some strings were as much as 14 cents out. No string was closer than +/- 5 cents even though I had set the precision to +/- 2 cents.

There are a few high frets and a small amount of buzzing. I suppose the whammy could be fluttering but it does have 4 springs and is pretty stiff.

I'd appreciate any and all comments that could clarify this phenomenon.

The question should be addressed to the manufacturer of the tuning unit.  It's their 'baby' and they have tons more experience with their products, and the resultant "niggles" and fixes than anyone.

Personally, I consider this system to be a snake oil product fraught with potential post-installation problems, but that's just my PERSONAL opinion.

Good luck with this.

Thanks, Paul. I indeed submitted a technical request to Tronical. I looked for a phone number, but all I could find was a number in Germany.

The unit seems solid, but I suspect you are right about post installation problems. The unit needs to detect the fundamental cleanly and I guess they have filters placed after the transducer. I suspect that the coincidence of several minute issues might might conspire to render it inaccurate. It would be a shame if whether it worked as advertised depended on the "luck of the draw" or endless iterations and repairs (refretting, new nut, certain whammies, etc.).

This is why I'm hoping someone with experience can chime in.

I installed one of these units earlier this year and experienced basically the same issues... I spent tons of time trying to fine tune the unit as well as setting up the guitar with varying results... I really think that this type of product has it's limitations on how exact it came be...I feel like the setup of the guitar kinda goes out the window when changing the tension so much.. It just seems like I couldn't get it to work that well either..Some of the tunings sounded in tune relative to itself, but when tested on my bench tuner, it would often be off by 5-10 cents...

I even installed a mag-lok trem stabilizer to see if it helped, and it didn't do much...

Sorry I couldn't give you any real advice, but thought I would share my experience as well...

Good luck with the project... 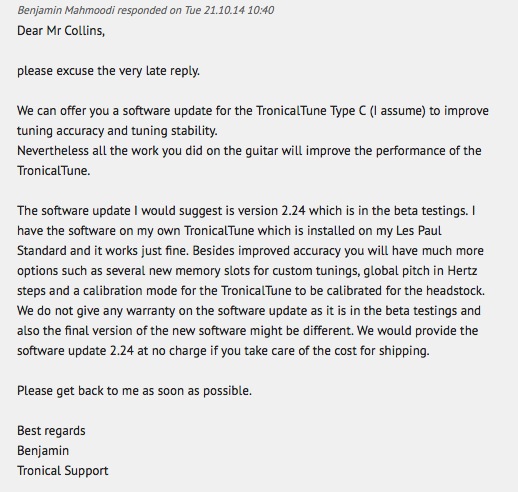 It's interesting that of the new features he mentioned the ability to tune by frequency and the ability to calibrate the tuners to the instrument (head) it's mounted on may help your problem. I'd say it certainly could indicate that they are aware that this is a problem and they are working on solutions.

The catch is that it's beta and I don't know that I would put beta software on a client's instrument. In the computer industry, Beta is never considered truly stable. While it may be working "just fine" on his guitar it still may have issues down the road. If they knew it was stable it wouldn't be beta anymore and chances are they know that there are still some issues. If it was you're guitar I'd say go for it but, unless you can insure that the final distribution can be installed as soon at it's available. I'd hold off on it.

I'm with you, Ned. I forwarded the email to the customer so he could decide.

Harmonics below the bridge and above the nut can confuse a tuner, strobe or otherwise.  I have a mandolin that I could never tune accurately with a Petersen strobo-clip tuner or any other--although I did quite well just twisting the knobs.  It turned out that on two of the four pairs, low amplitude harmonic overtones above the nut that were close but not exactly the same as those generated by the fundamental were confusing the tuner.  muting the affected pairs with little rubber grommets cured the problem  Could be the same thing with the reference tuner and maybe with the Tronical product.

Re the beta update, I'd try to get a commitment from the manufacturer to supply the final product if you use the beta now.

Good advice, Larry. I've used the rubber grommets on archtop strings between the bridge and the tailpiece. I probably should have muted the strings above the headstock with a polishing cloth. At the time, I assumed the tuner was reading the string vibrations off the tuner shaft. There very well may be a transducer coupled to the back of the headstock.

Surely the tuners have a sliding filter that diminishes harmonics above the fundamental by 6dB+.

This is hard to say, and I do not wish to adopt a troll like stance here, but I just read the message that Tronical sent to Robbie Collin and it rang some alarm bells.

What I see is that Tronical are responding to a problem with current (sold) products introduced into service, with a software update.  As is the way with modern marketing they are offering a "free" software update which is probably required by statutory warranty regardless as the goods may fail to meet the advertised specifications.

Audacious move to charge the consumer for the shipping.  I wonder if they are contacting all current Tronical customers with the news of this update, and providing free shipping and installation of the fix.   This is different from a firmware of software update that gives greater capability - we pay for that.  But, this has all the appearances of a "fix".

I won't labor this topic as that would be trite, but I have a brand new one  in for repair (snapped the headstock off in the case) and will see how it goes "straight out of the box" when it's back together.

I trust all will be good, I'm just a little cautious with new stuff.

You'd think the customer rep would just email it to me or point me to an ftp site.

On the matter of tuner/strobe response to "quirky" instruments, I've recently taken to using both a Peterson Strobe (Strobe-o-Flip to be precise) and a Boss TU12H (analog needle type tuner) - chained in series.  The Boss allows me to quickly check intonation as I find the Strobe a bit busy but it does seem to be more tolerant of overtones once the strings are tuned to pitch in most cases.  The Strobe is certainly more accurate.

Difficult intonation problems (at least in my experience), in the absence of buzzing frets - usually points to a poorly cut nut.  Overly wide slots or having a string break over the nut behind the face have both caused issues for me as the string appears to have different effective lengths during the initial attack (high amplitude vibration) than it does as the note decays.  Pickups with strong magnetic pull don't help either and I often lower the mid/neck pickups to do the initial setup, verifying the final result with them reset to height.  Perhaps testing the tuners with the pickups lowered may help.

Regarding the two point tremolo, I wouldn't think that lubrication at the pivot points would be necessary.  They should operate correctly dry.  If the knife edges of the bridge plate or vee of the posts are damaged you will have a kinematically unstable situation.  Polishing the posts sometimes helps but once the precision surfaces are deformed, replacement is the only option.