Inlay on fingerboard and routing a rabet for the binding...

Once I scribed the abalone diamonds, I removed them and, with bits donated by my dentist (!), chucked in my dremel, I hollowed out the cavities for them. Then I dropped a bit of superglue into the cavity and tapped the diamonds home using a wood tapping block. After the superglue dried, I sanded the fboard down flush. 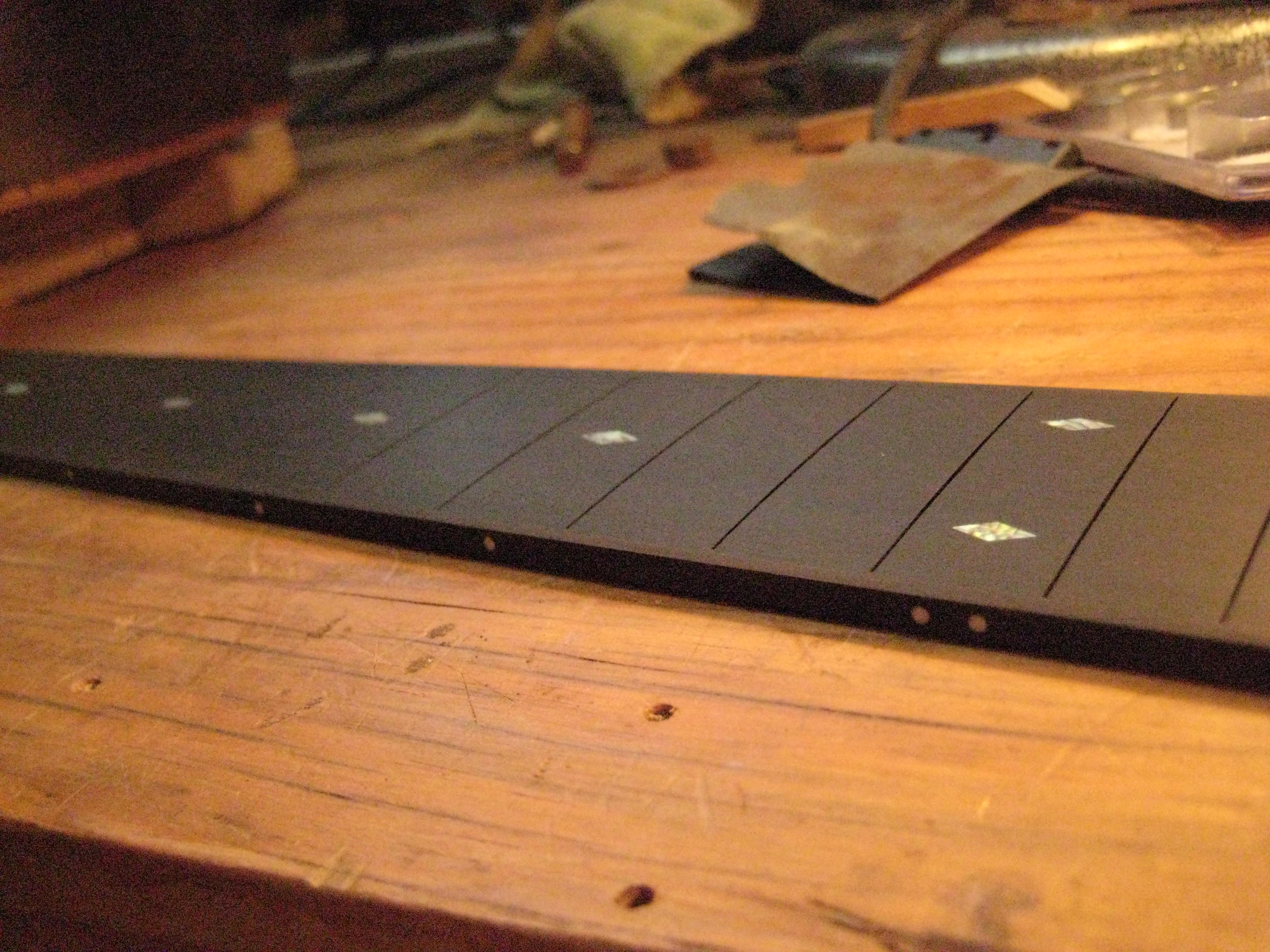 I did the same with the plastic position markers for the side of the fingerboard.… 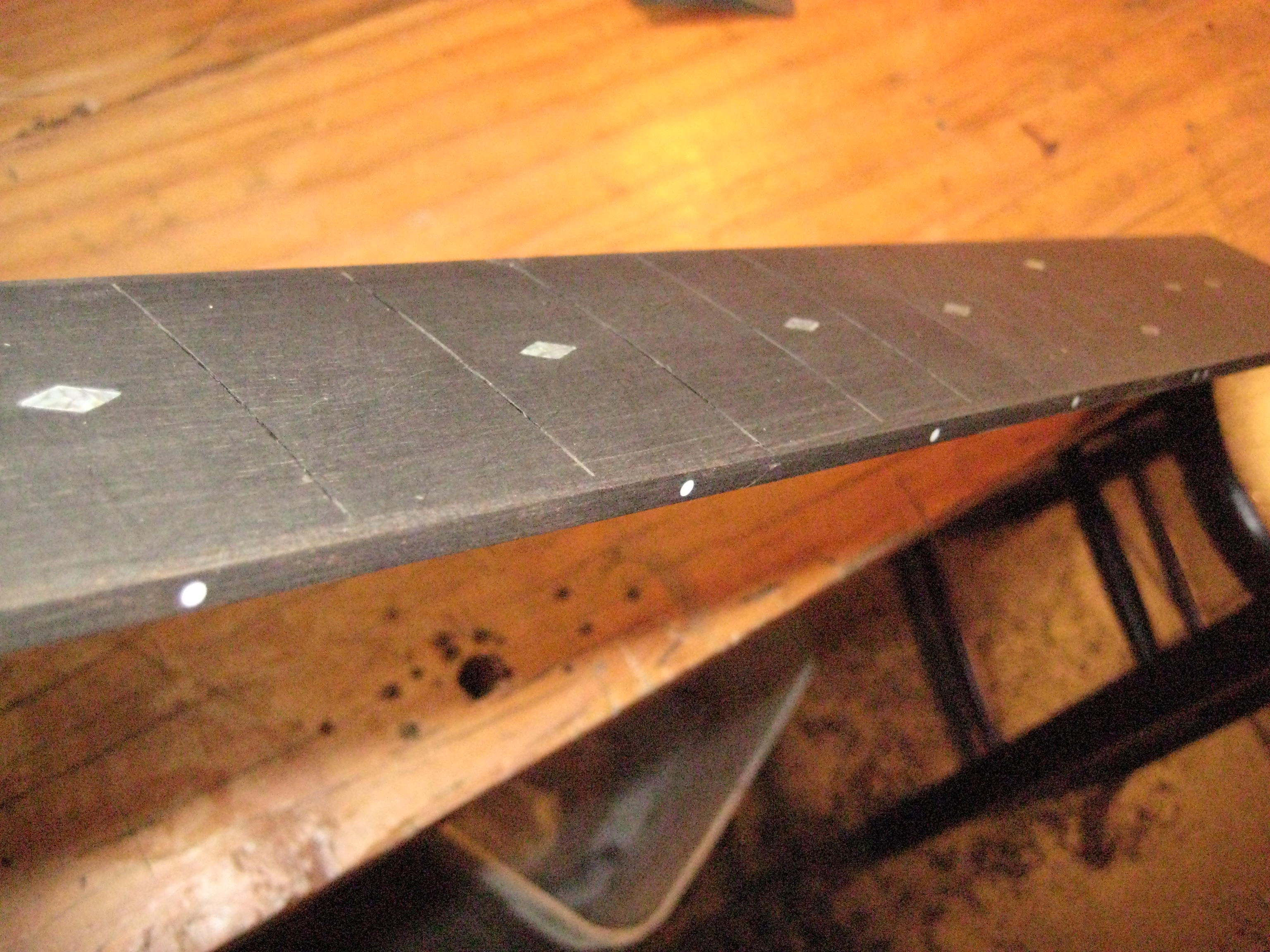 Soundbox glued up and fingerboard details

Gluing the back to the sides/top assembly. 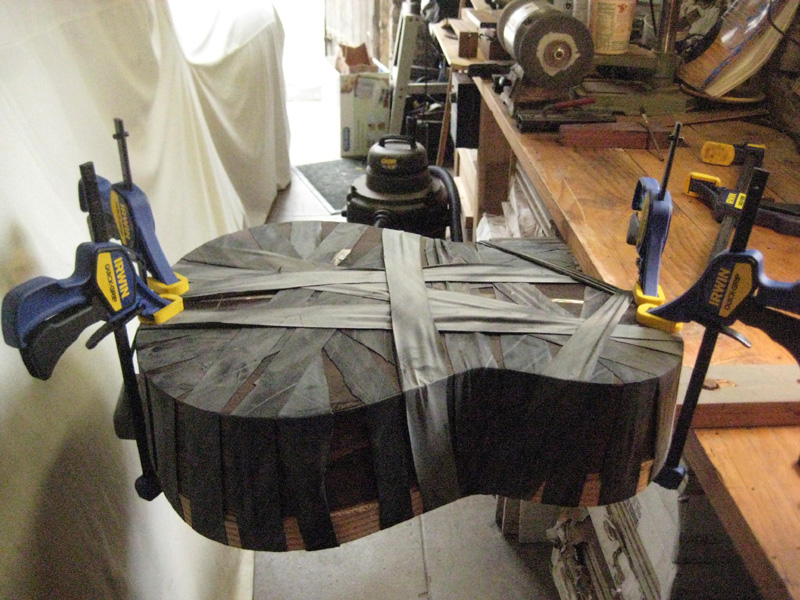 I made abalone shell diamonds to inlay on the fingerboard. Here they are laid out and temp cemented to scribe around prior to routing out the cavities for them.… 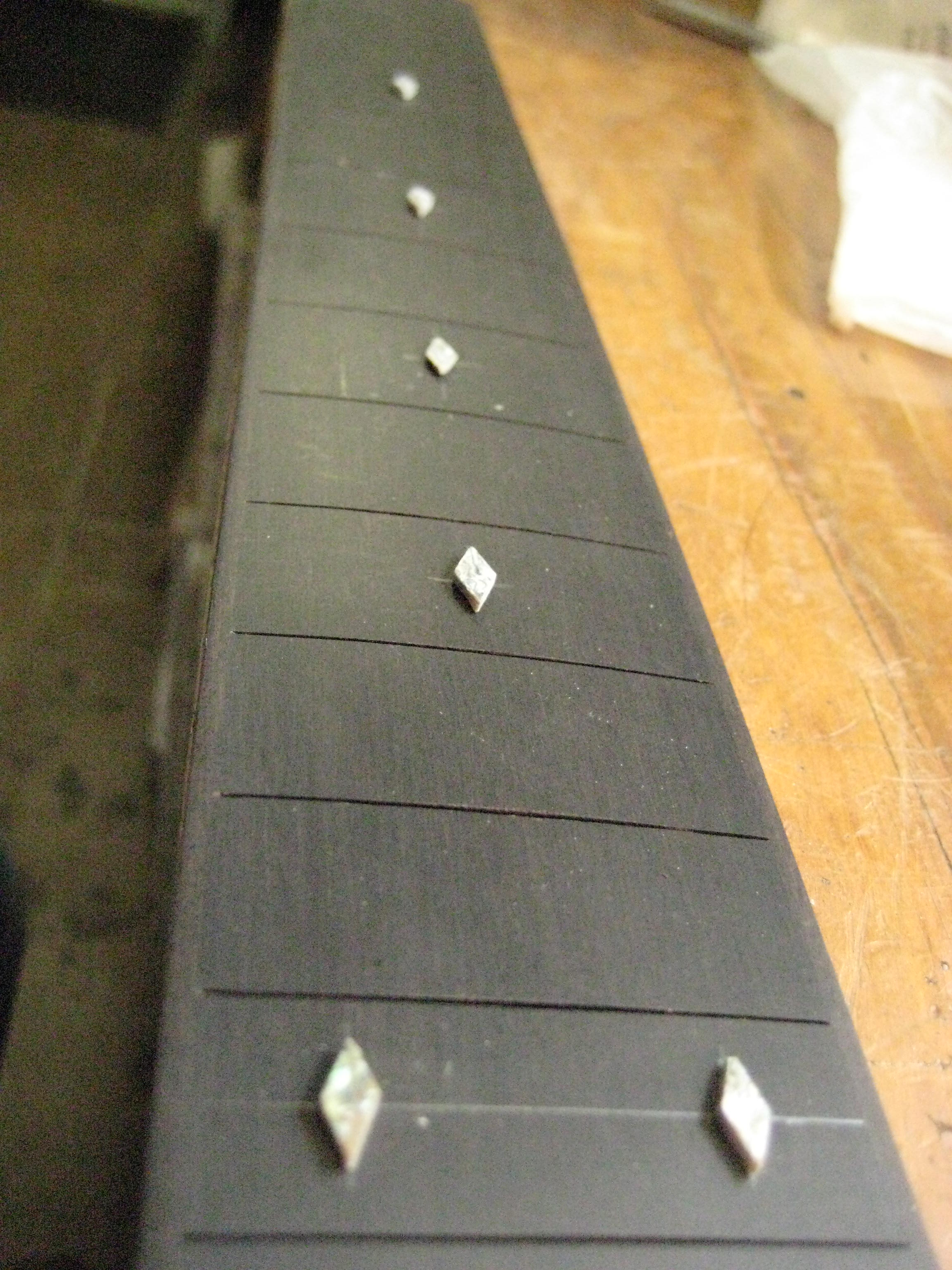 Interested in building a charango? Well, I will not provide a perfect tutorial, but I can present some important steps in building a carved charango, starting with hollowing out a block of wood.

There are charangos made from just one solid block of wood, and there are others made of several pieces. Doing it in several pieces you'll have more control of warping and it's way less waste of precious natural resources, so it's the multi-piece charango I'll go for.

Here is a… Continue

Playing around with this demonstrated to me how a little change in one dimension effects a larger change in other dimensions. Newenglandluthiers.org has a webpage which helped me quantify the necessary adjustments. The previous post concludes with a photo showing the clearance at the bridge location of a straightedge placed on the centerline of the fingerboard. After adjusting the neck heel, this was the condition: 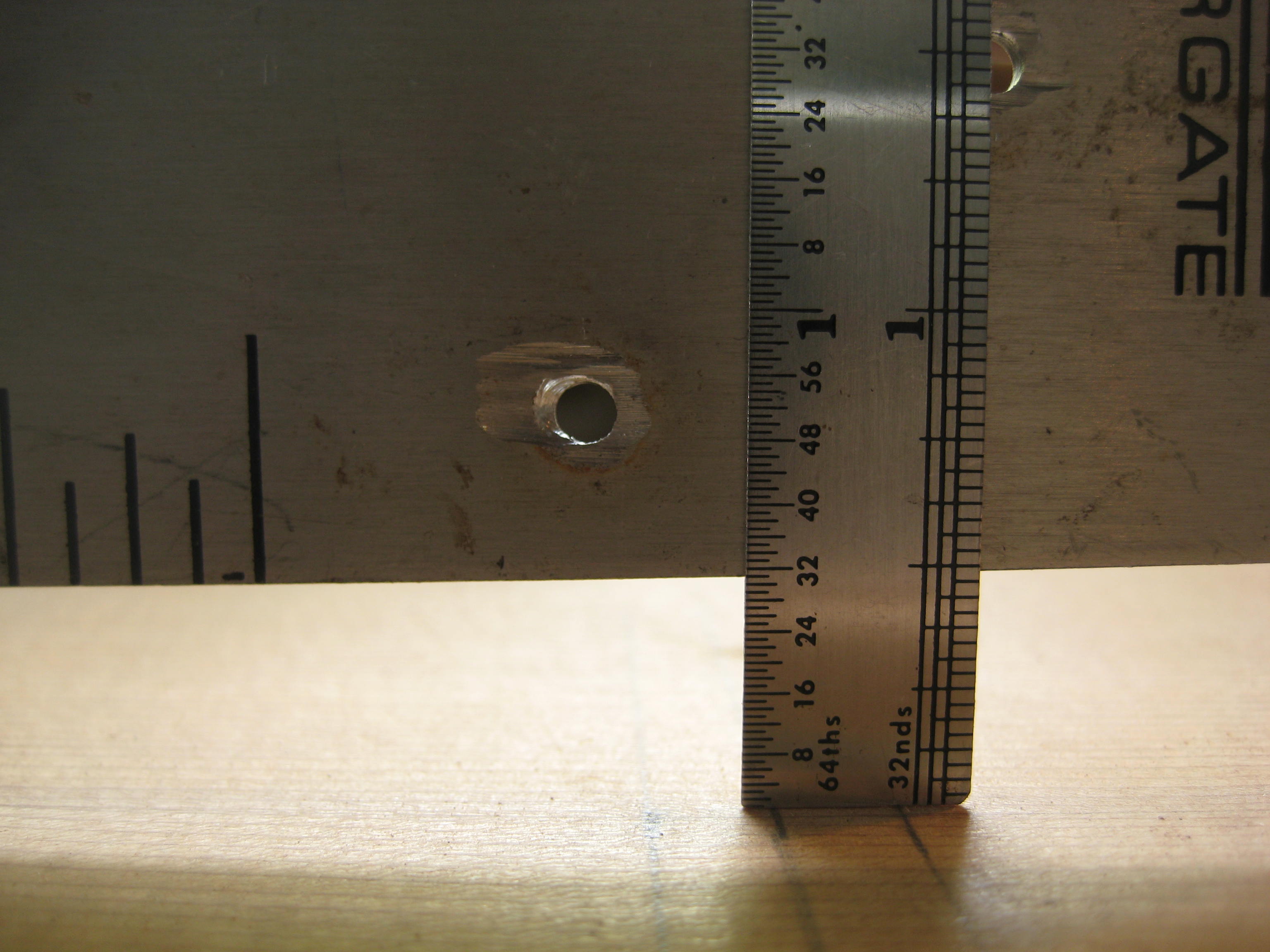 Tks to anybody's help in telling me ho to safely clean a stiky neck on a Fender Custom Shop's 66 Jazz Bass Closet,
without hurting or damaging the nitrocellulose lacquer finish. The bass is quite 2 years old, and I'd like to have the neck fast and not sticky....Any suggestion is welcome and much appreciated...Thanks so much. Fabio

Mark prepares the neck for bolting to the Frankenguitar body

Okay, the neck: I started with a neck partially shaped I "inherited" from a friend who passed away. I think it was from a kit, because it has the cute bump under the headstock, the shaft pretty much shaved to shape, a groove for a truss rod and a tenon at the unshaped heel.
I glued on the headstock veneer, trimmed it down and laid out and bored the holes for the machine heads,
I decided after some reading and thinking, to saw off the tenon and pursue a bolt-on neck ala the older… Continue

Mark braces back and inlays back trim strip w/ abalone

I traced the outline of the top/sides assembly onto the dreadnought-shaped back I started with, and braced it with spruce strips. I'm using the Cumpiano book as a general guide, but also using wood from inventory, so inventory trumps book for this project when there is a conflict on size, species or other parameter. 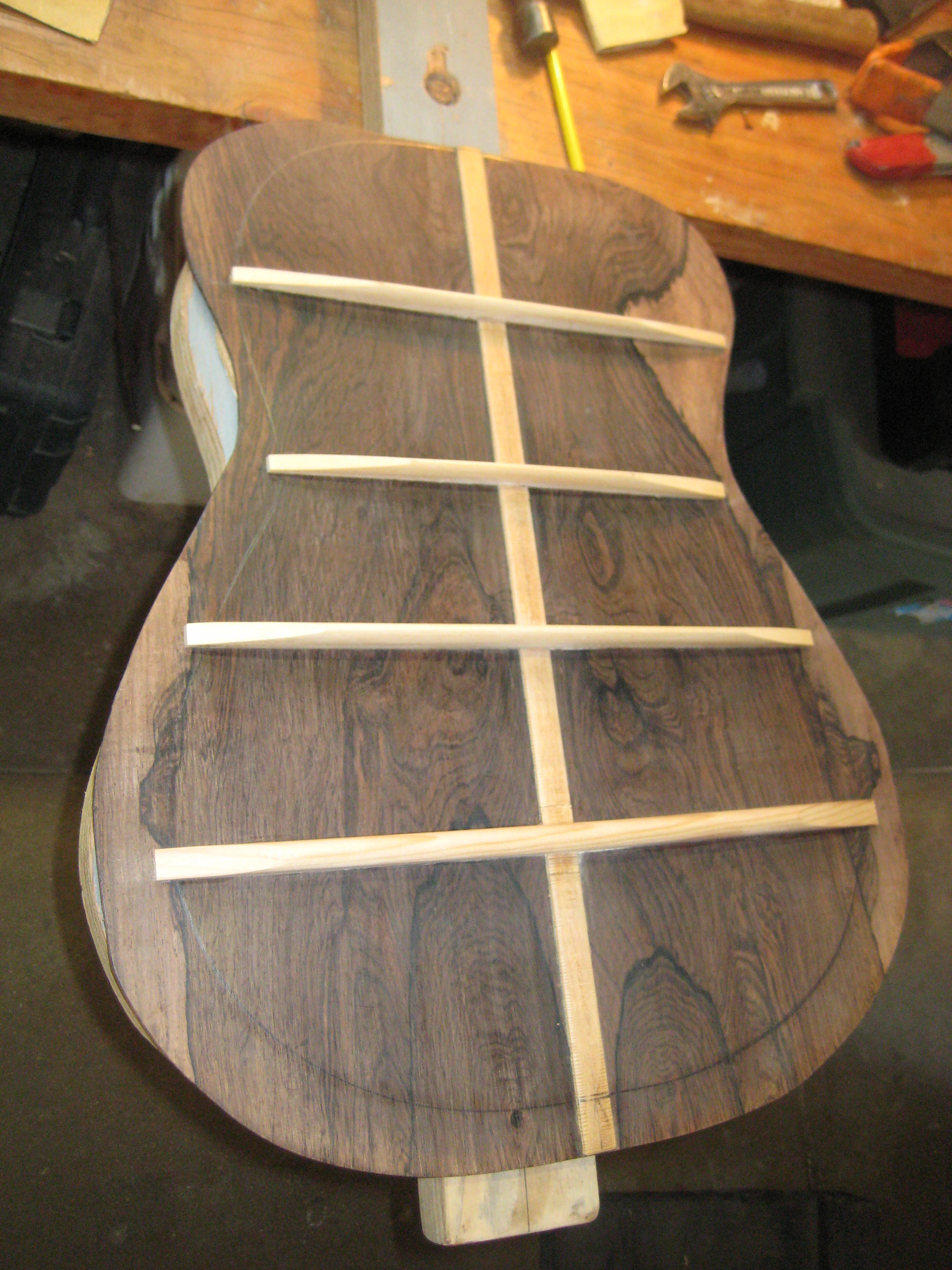 I used a wet saw to mill the abalone, wearing a respirator and a fan while working outdoors when final-grinding it down on the… Continue 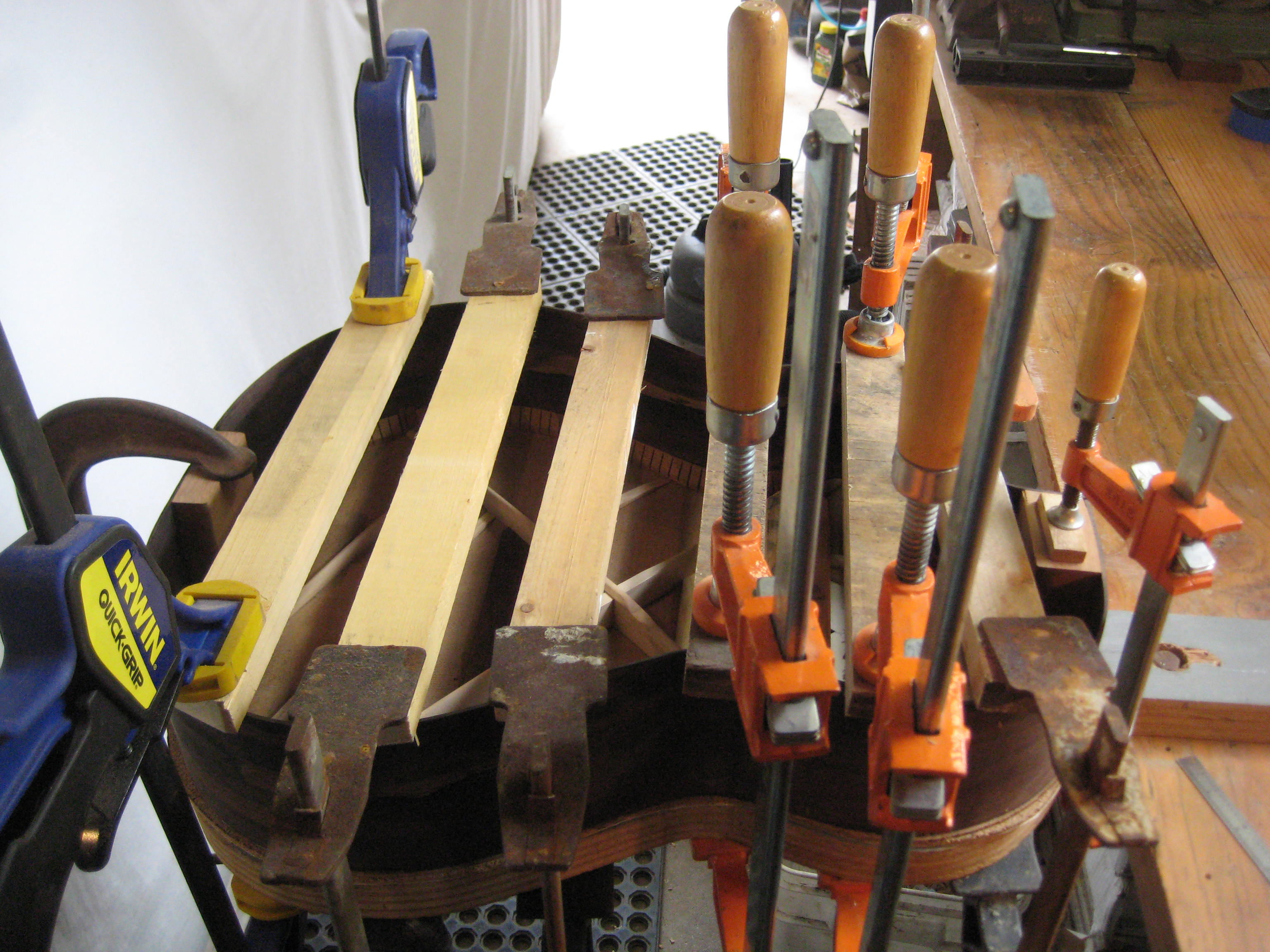 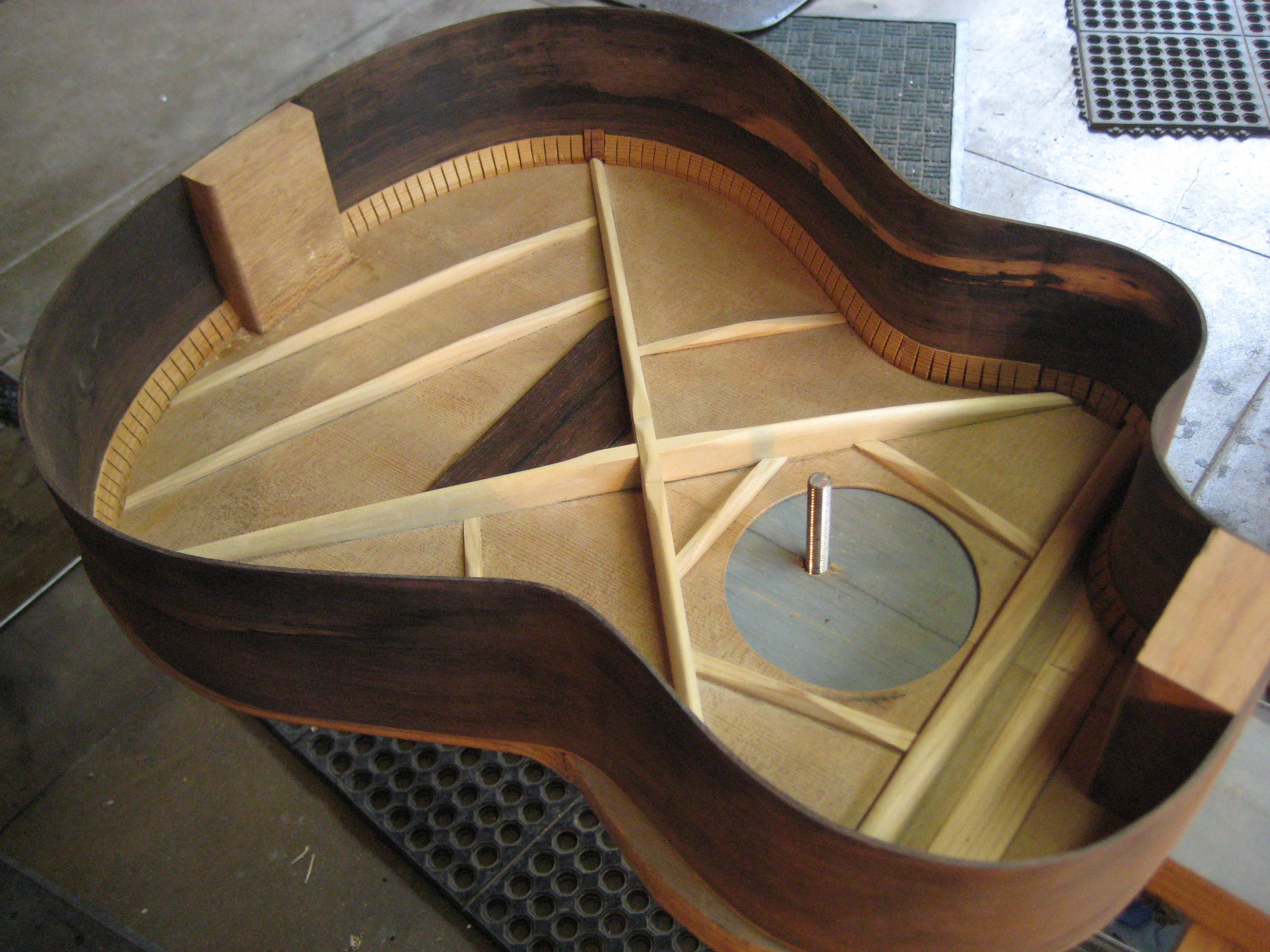 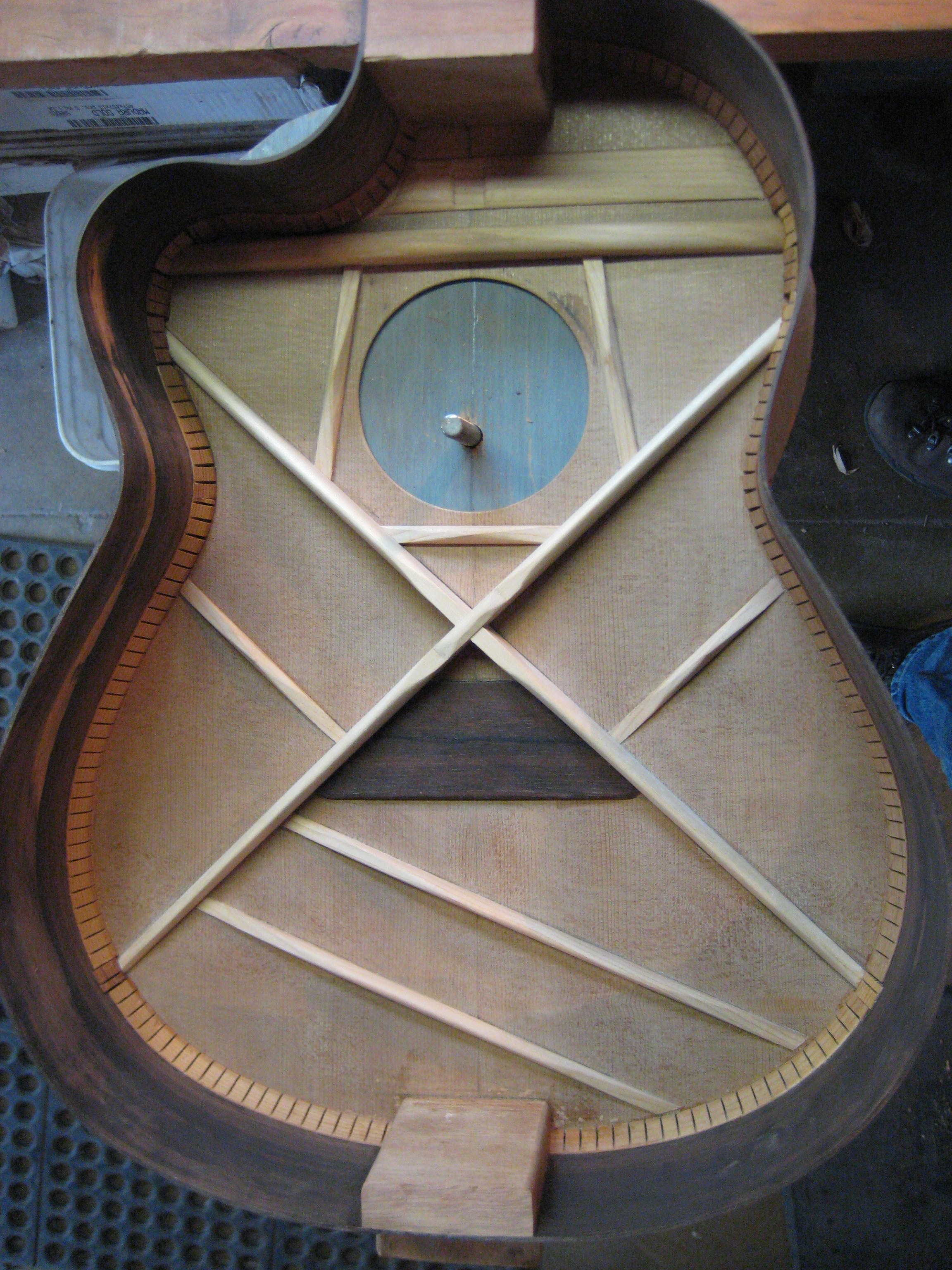 My side-bending set up is decidedly low-tech. I figured, the old guys managed to do it this way, it CAN be done, I'm gonna do it! Got a 2.5" pipe and a flange at Home Depot, threaded the pipe into the flange, sledge-hammered the open end ovally, slipped an old tin cup over the open end, clamped the flange edge in the vise, wired up the torch and flame on! Like I said earlier, the sides I'd come by had already been bent to a dreadnought pattern, so I had to unbend and rebend 'em to fit my mold… Continue 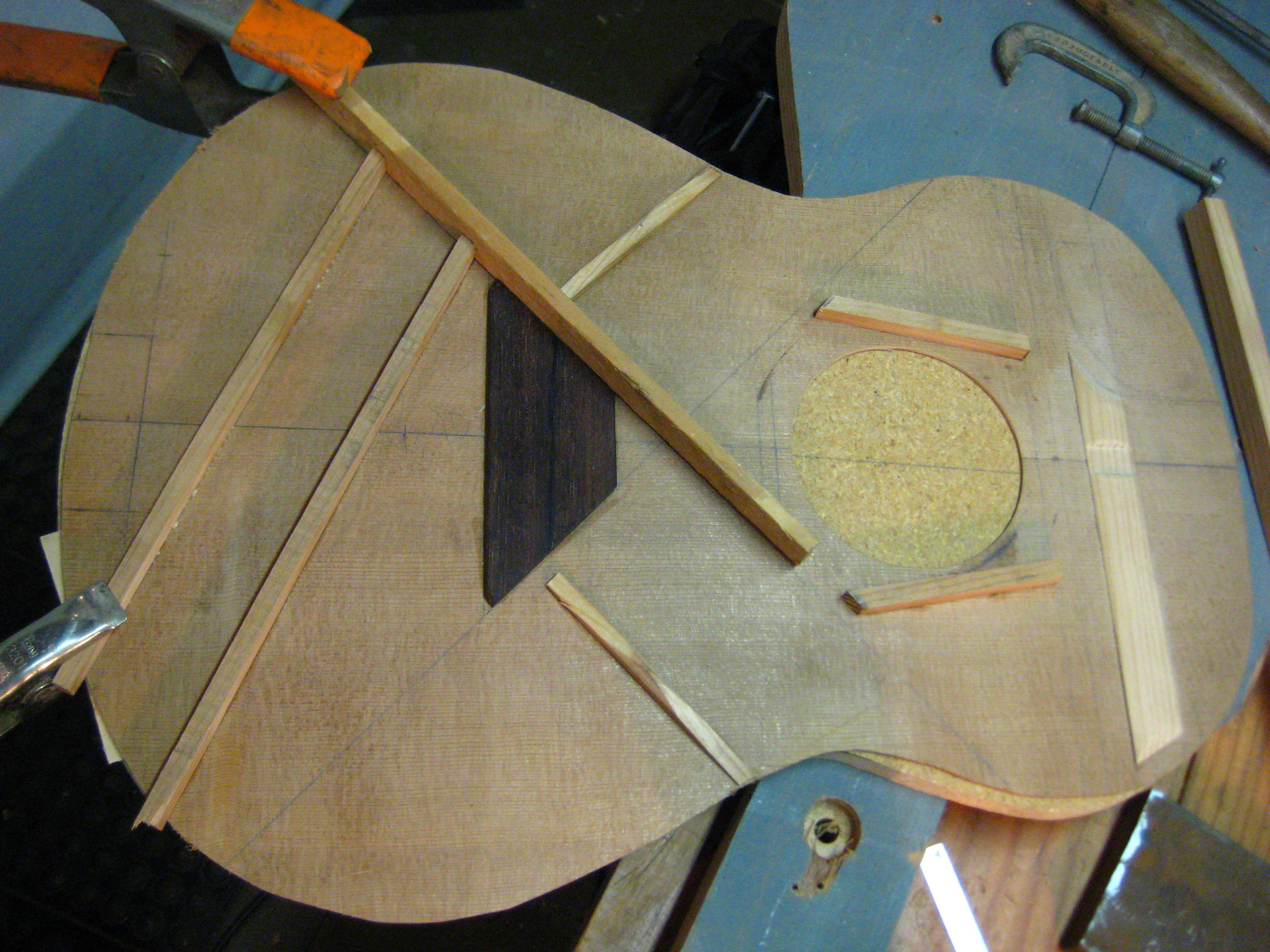 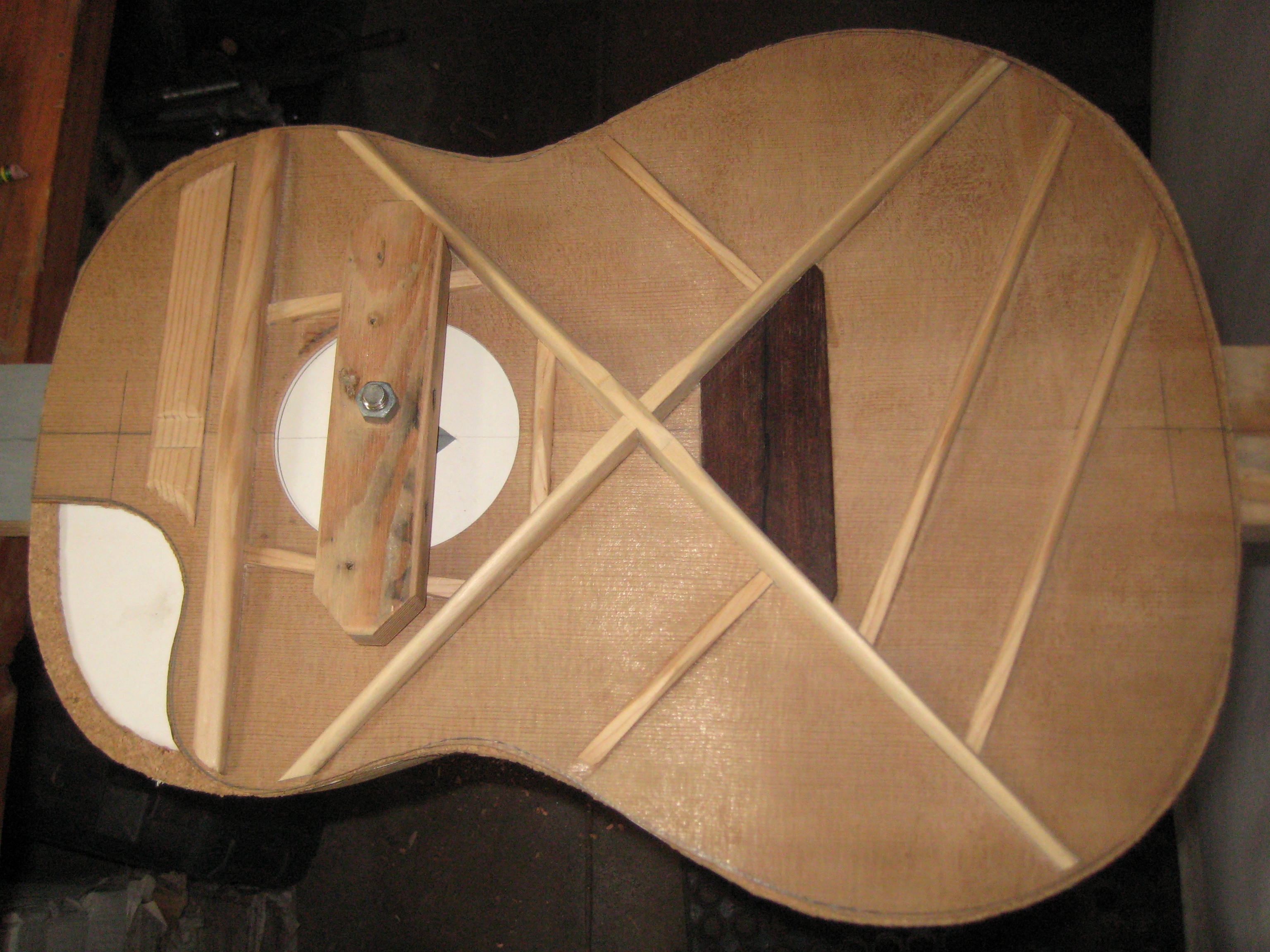 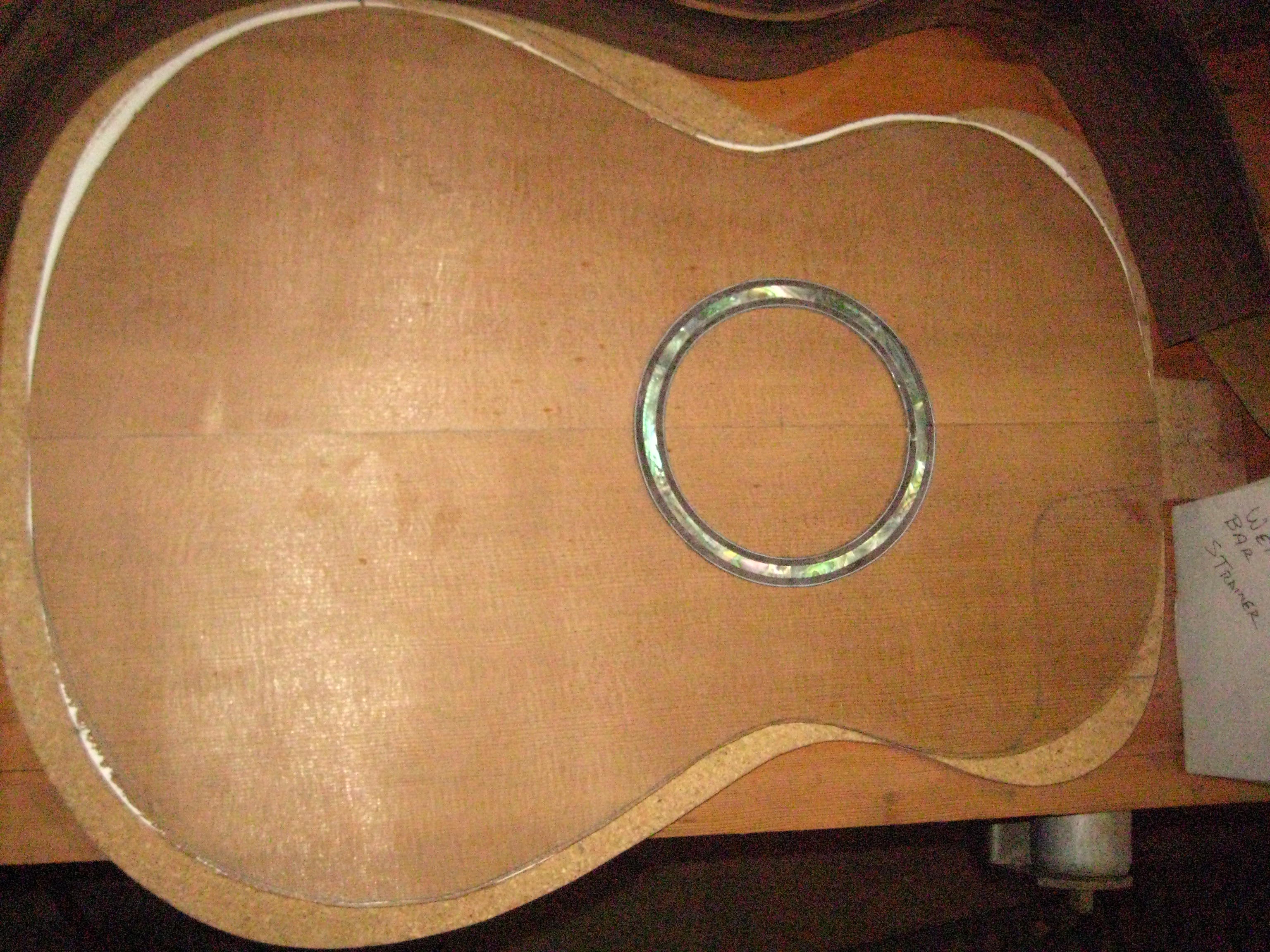 So the rosette came out well, and I turned my attention to cutting out the circular trough for it to sit in. I don't have a decent drill press or a 'fly-cutter' whatever....What I do have is a drywall circle cutter that I modified and used to successfully cut the channel. There's room for improvement, but it sufficiently filled the gap for now. The mistake I made, however, was using epoxy to glue the rosette into the channel. I should've used AR. The… Continue

I've started my first guitar. Actually, I started it over thirty odd years ago, but for one reason or another, I set it aside for a moment to accomplish some other things. Now, the time and opportunity have coalesced to bring this project farther along. I long ago and at various times have collected an assortment of woods, tools and know-how. The spruce top I joined first, back in the seventies. Some other parts came from a second-hand kit I picked up along the way, abandoned by it's first… Continue 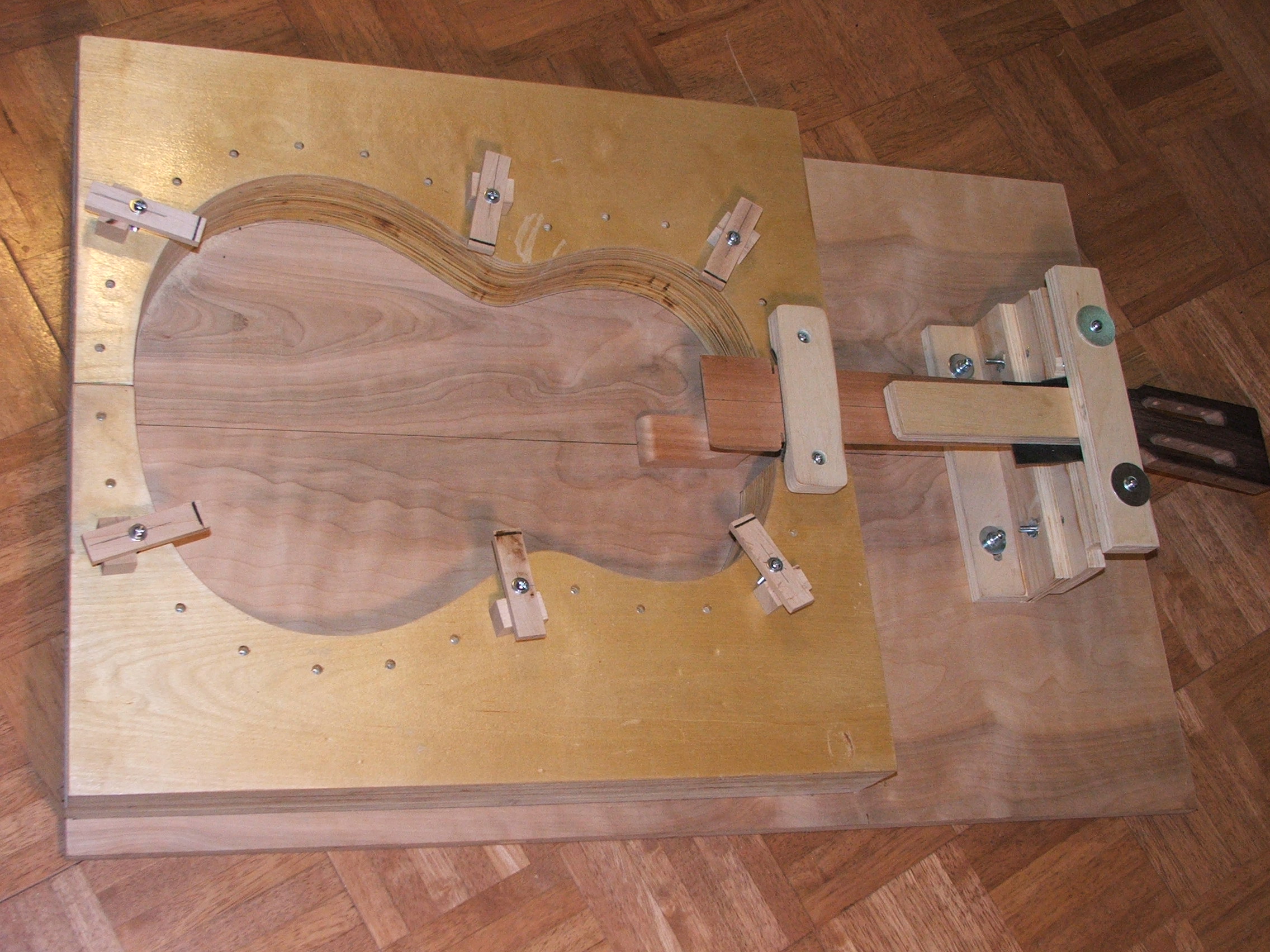