I was wondering if anyone has run into one of these Guild M-20's with the back that extends and acts as the heel cap.  It needs a reset and I was gonna get any opinions on how to approach this. Obviously, the usual neck-removal jig won't work... It gets worse - if this is like other Guilds, then there is probably glue holding the heel in place against the body, which is part of what makes these a pain to do a reset on - wide heel, glued to the body, with no way to get steam in there.

If it was me, I would simply cut that lovely extension off, and put a new heel cap on. And prepare for a hellacious job getting the neck off. And a lot of touchup work afterwards, since this was finished after the neck was mounted.

There is a guy on the Let's Talk Guild forum that does a lot of these - I think he goes by the handle of Fixit.

I'm with Paul on this, too.  And, one distinct advantage to resetting by slipping the back is that you can set the bridge up with a reasonable saddle height, put on the first and sixth strings and use them as convenient indicators of action as you adjust the neck angle and glue it up.

This might be a candidate for the type of neck reset some folks like to refer to, pejoratively, as the "California reset," or what those of us already in California usually refer to as slipping the back. In other words, rather than trying to get the neck out of its mortise, just open the back seam between the arrows, and lever the back ever-so-slightly, and glue it back at a better angle. 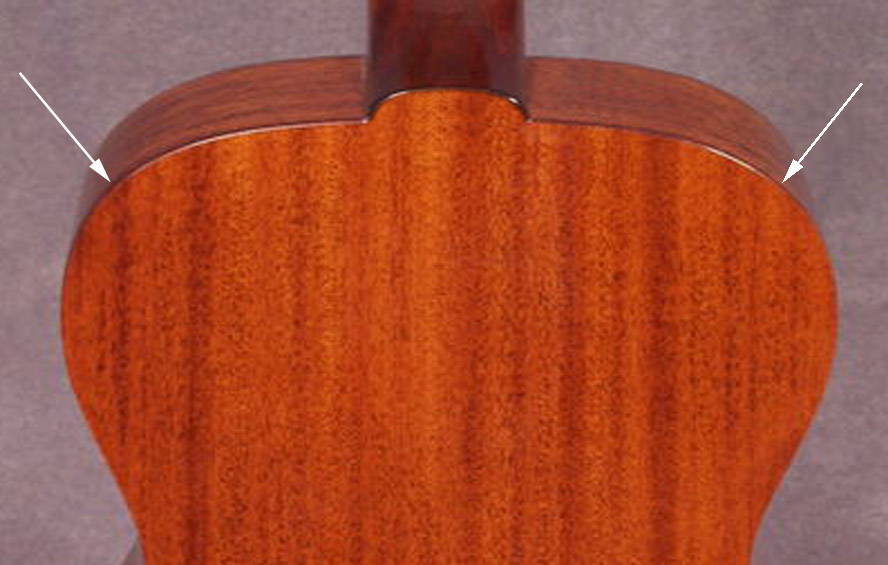 This begins with the advantage that you have to open that seam between the heel and the back anyway. And you have no binding or purfling to worry about.

It is undertaken with potential perils, such as:

1) getting the seam open cleanly, without cracking the somewhat fragile mahogany

2) keeping the operation very symmetrical: there's a risk of ending up with the neck going slightly right or left, which means the strings will be too close to one side.

3) overdoing the reset. As is also the case with normal neck resets, you can't be careful enough. You can check the angle in a dry run, but probably only need the back to project about 1/16" past the heel. And another aspect of torquing the neck back is distorting the plane of the back and the lines of the curve, which is possible if you overdo it.

4) trimming and cleaning up the overlap, and touching up the finish.

This technique fell out of favor a long time ago, mostly because it's messy (resetting the binding and so on, which you don't have), and it's rather irreversible. But this may be the solution for this Guild.

I have done what Paul has said to do and it will work but I usely open it up a little further down into the bout. Just watch out for the kink in the fret board if over done.Bill..............

Thank you gentlemen. Great idea. I've done this repair before on a classical and I think it's the right call for this one as well. I'll let you know how it turns out!