I have a customer who's brought in a 1957 Gibson J-45 with extensive damage. He's wanting to have it restored. I took some pictures of it and the damage to ask you guys what you would do. He would like to have it refinished , new frets, new bridge, and resurfacing of the fretboard. The top has damage from using a pick and a soundhole pickup. Also there's a hole in the side where an input jack was installed. And there's extensive damage to the back of the neck in the finish. My question to you guys is, what is the best option to keep the value of the instrument as high as possible. He's not intersted in selling it after I do the work. Also, I wonder what you guys would charge to completely restore the guitar including refinishing the whole thing. After I added up what I thought it would cost at my rate of service, it was really high. I don't want to rip the guy off. Any help would be appreciated. There are some pics below.

I agree with all the previous posts.  The less you need to do, the better....as far as value is concerned.

If the customer insists upon a complete restoration (as in "like new"), I'd point him to Gibson's repair & restoration folks.

Permalink Reply by Jeff Perkins on April 17, 2011 at 12:08pm
Also, the tuners are all bent. They barely turn. I believe he wants new tuners installed as well. What do you recommend on that one?

The BEST tuners for this are the Tonepros Kluson 3 on a plate.

They look right, have the kluson name on the covers, but actually work well without backlash.

I have replaced regular Kluson tuners with these on a number of my guitars, with a huge improvement in ease of use.

Tuner shafts can easily be straightened, but if the tuners are shot and work poorly, I'd replace them with similar reproductions.

Permalink Reply by RETROROD on April 17, 2011 at 1:40pm
Honestly, unless you can provide pictures to the contrary,,,,that finish don,t look too bad! I would be proud to play it!

Funny old mob the guitar repair community.......if the customer has considered the situation in light of resale/value etc and is aware of the issues and hype surrounding old things he is entitled to do whatever he wants with something he owns.  Our job is to offer advice (which my colleagues have so correctly advised) and then do whatever we are tasked to do - or refuse the job.

We also are obliged to charge a fair days pay for a fair days work in accordance with industry standards.  Hope these basic principles help.

If someone asked me to refinish this particular guitar, I'd explain why it shouldn't be refinished, and if he or she still insisted I'd turn the job down. I don't need work, that bad, that I'm going to do something to a guitar that is not proper. All the nicks, dings, and scratches tell a story that should not be erased.

Actually I've never ever totally refinished a guitar, never seen one that needed it.

Permalink Reply by Kerry Krishna on April 18, 2011 at 10:38am
Many of us here , I think, would be proud  to own this guitar after the necessary repairs are done. The bare wood is nothing but cosmetics. Imagine the original owner, and how hard he must have been hammering on this axe . He may have even seen some wood dust flying  while he was flailing away! He would be laughing his head off at the 'refinsh' part of this thread. Over the years, things have changed in my mind, and I sooooo appreciate shattered lacquer, and the honest damage that this guitar has. If your customer wants a new looking guitar, he should go buy one.

I can probably find him a new shiny guitar to trade for that one.

The customer always has the right to do what they want to thier instrument. But I would let HIM do it. It would have to be a whole lot worse before I'd even think of refinish.

I know people who turn nice restorable old pickups into streetrods. Cut them all to pieces. Same kind of heartache for me.

Momma always said, ":ain't no accounting for other folks" !

It's very very very obvious that this guitar didn't "grow up" with your customer and that he's got "dollars in his eyes" and nothing else.  Other that a mercy killing (just kidding) I really don't know how you can help him.  All that ragged sound hole edge and pick damage is hours and hours of making the player, and probably many others, happy with the music.  You can't buy that!!  And I agree totally with the finish issue in general - just looks like a Gibson of that era.  Being a performer first and repairman secondly (due to the first actually) my Martin's sound board looks worse and will, I guess, eventually be some else problem like this.  But right now I believe that every missing spruce fiber contributes to the sound and when I can't play anymore I intend to pass the instrument to a younger/promising musician who will hopefully understand and treasure my abuse - nothing, but nothing, sounds worse to me than a "put your shade on" shiney  30 + year old guitar that's never been "broken in."  Yep, 'sounds like just off the show room" - but just off the showroom is flat, dull, and lacking character.  The instrument sound just like generic "Brand Name Model XYZ" - common, run-of-the-mill and not what the iconic folks who've defined modern acoustic style sought out and made their names on.  It was the long lost axe that some certain blues man or "country" (then called "hillbilly" - since I am a hillbilly I can use the  name with out insult) made his name on before he faded into history - Mike Seegar still proudly plays Dock Bogg's instrument.  But not that thos folks (50-early 70s) have become the icons, of yet another generation of icons it's gotten to where the instrument repair folk are the one's keeping the sound as original as possible since the actual musicians have lost a couple of links in the continuity of time.

I can't remember who responded about trading a nice shiny guitar for it but that's actually a reasonable strategy.  Check the professional musician circles and you'll probably find some up and coming musician who Gibson "blessed" with one of their shiny "plastotaurs" who'd be more than willing to swap for this piece of history. You customer would get a shinosaur that they could play or sell as "played by......" while the real musician would help preserve and keep playing the musical instrument - not "retaining commercial investment" (what is a "derivative" and can I eat it or burn it for fuel if I were cold?). 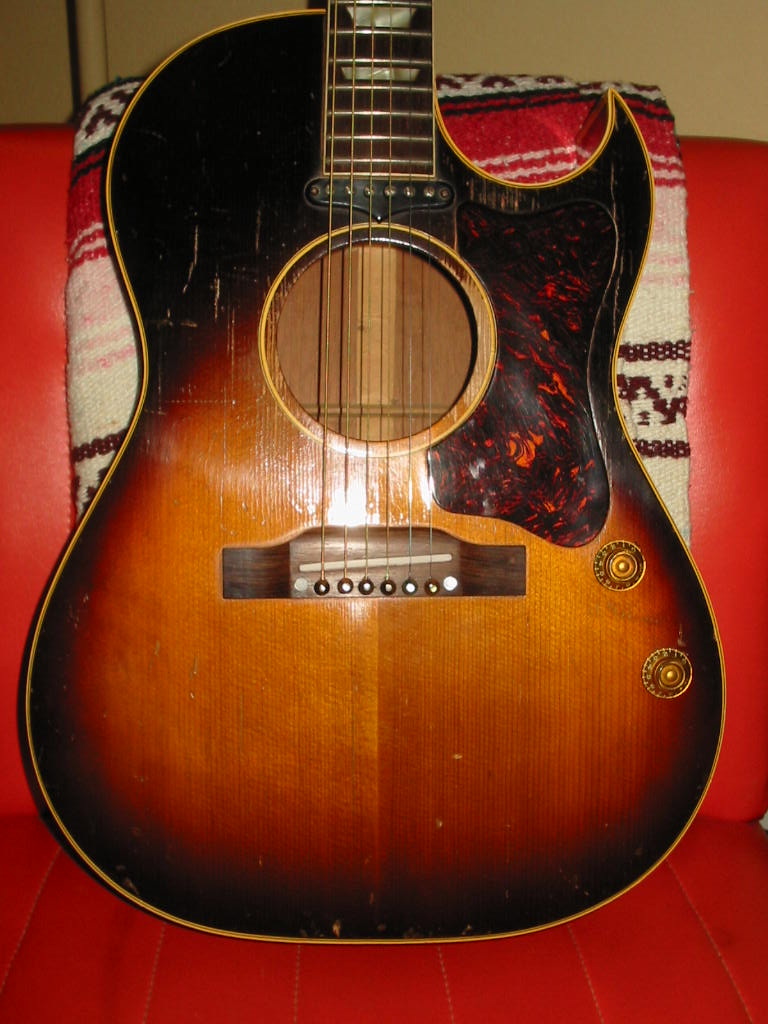 Honest playwear....Not all mine! Fifty plus years worth. I would not change a thing....Rod

Permalink Reply by Jeff Perkins on April 21, 2011 at 11:51am
Well, just an update, I spoke to the customer. I told him we should leave the finish alone. I said if he wanted a new shiny guitar, to go buy one. I told him if he wanted it refinished, I wasn't going to be the one to do it....though I wasn't so blunt with him. I said we should repair the structural damage and refret it, filling in the divots on the fretboard. I know I didn't post pics of the fretboard, but it really needed some TLC. After explaining everything, he agreed with me. Thanks for everyone's input. I didn't want to ruin a relic like this one. Though I'm in the business of guitar repair, I didn't need the money bad enough to destroy the history this guitar embodies. When I'm done with the repair I'll post some before and after pics. Thanks again to everyone who put their 2 cents in! It's nice to have a platform to get the opinions of other luthiers before starting on a project such as this.