Would you add a Bigsby, stop tailpiece studs, and a modified fretboard inlay to a nearly perfect 1967 Gibson ES345? 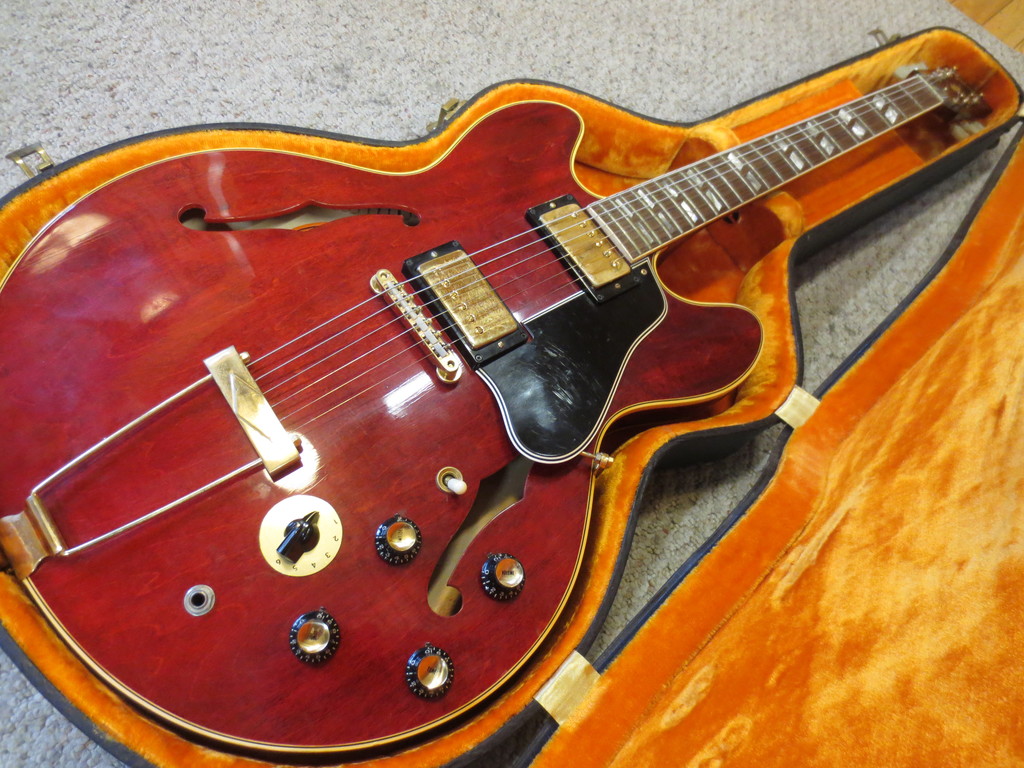 Of course not, right! So where's the dilemma?

Well here's the story. The owner wants very much to do these mods to this guitar because he is part of a community of fans - very serious fans - of the movie Back To The Future. So serious that he's spent over $26k restoring and modifying a Delorean to look like the car in the film. And in that scene where Michael J Fox plays Johnny B Goode for Chuck Berry himself, he plays a cherry red 60's ES345 with Bigsby, stop tailpiece studs, and an unusual looking solid block inlay at the 12th fret.

The argument for doing work like this is: 1) It's his guitar 2) he's going to find someone who will do it 3) These are not uncommon modifications to this guitar and Gibson themselves did some of them 4) This work may actually enhance its value within the film fan base and 5) Why is the vintage guitar community more correct or less crazy/silly than the BTTF fan community?

And yes, we do know the correct answer here, but I'm interested in the reasoning we all have. Discuss!

Perhaps you can talk him into adding the Bigsby and fretboard inlay but using vinyl decals for the studs (there are many custom vinyl decal companies on the web). Then it would be reversible with a bit of rosewood inlay on the fretboard.  If he's a young guy you might sell it by mentioning that it's possible for the BTTF market to disappear in 30 years time and that any decrease in BTTF guitar collectors will depreciate the guitar.

Let's say "we" want to do the right thing and not booger an old guitar:

1) The guitar in BTTF 1 may have only been modified by the inlay on the neck. 335 types frequently left the factory with studs and a Bigsby. The studs were covered either by a plastic "Custom Made" plaque secured with brass brads (nice...) or pearl dots. I'm thinking the pearl dots probably covered holes w/o bushings.

2) The guitar in BTTF 2 does not have the special inlay. I'm embarrased to know the scenes in BTTF 2 were reshot.

Unless this guy can afford the actual guitars used, he should keep looking for an old cherry 345 with both studs and the Bigsby. That should be expensive enough to satisfy his cravings and authentic enough without the odd inlay because of BTTF 2. Or he can buy a reissue (with stop tailpiece) install a Bigsby and the inlay and then pay much too much for original knobs (which apparently Gibson can't find). The quality of the reissue would probably not enter in this discussion.

I think it is bad karma to booger an old guitar. 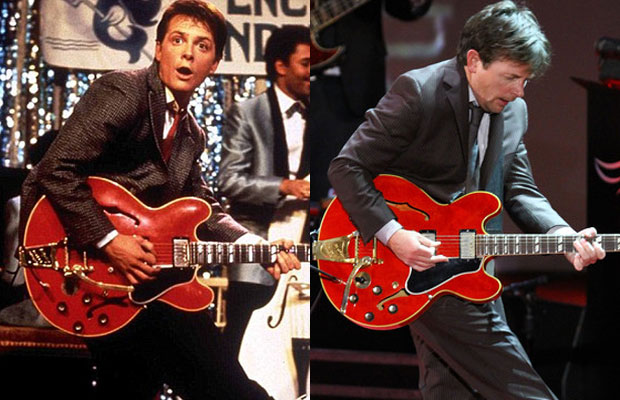 Great discussion everybody. We're frankly a little surprised that there isn't universal condemnation of the idea. Surprised and reassured because within our shop there's disagreement and we felt there was a fair argument to be made in both directions. It's very interesting to hear the arguments for and against from everyone. We're going to continue to try to talk him into using a different guitar but if he digs in... Well then we'll have to make a real decision. It's hard to imagine actually powering up the drill press and pushing down...

It would be a MUCH easier decision if the guitar in question were in player grade condition as opposed to EX++ condition. I bet that's what's causing a lot of concern.

Is the owner a player or a poser?  I ask that ONLY out of curiosity. I wonder if he's going to search for a guitar teacher to show him how to play what McFly played in the movie?

BTW: Epiphone released a 345 version, last year.  They've been discontinued but a quick search could probably find one.  Plus, the headstock mod wouldn't be difficult and could add significantly to the 'money maker' allure of the job. Just sayin' :)

I find it amusing (in my sick little way) that the most important mod that could be made to this guitar wasn't requested: replacing those gawd awful nylon saddles with metal saddles.

Best of luck with your decision making :)

p.s. If you take the job, bill at the rate that Hollywood prop designers would. It's probably much higher than what guitar repairmen charge. Plus, add "movie prop maker" to your resume....seriously :) Summary: cut the guy no slack with your billing.

The Epiphone is a great idea and it comes with a Bigsby.

I think it would be absurd to 'defile' that great example. I am sure that someone is willing to do it....but it is not me

+ 1 for Mr. Johansens idea. I would try to convince the customer to leave this fine guitar alone. And get a nice custom build exact replica. By you, or the Gibson Custom Shop.

So he knows it's exactly the same guitar/specs, without modifications. For some reason modifications will always come back to hunt you. And because he will know about the modifications, they'll probably keep nagging in the back of his mind "its not the real deal..."It's not the exact same thing..")

And If he's got the budget to spend 26k on a car...(holy cr*p... Or does it actually go back to the future?? In that case quite the bargain)

Well guys, this strange case has come to an even stranger close and I'm overdue on updating everyone. Our discussion here was so well discussed by both sides that we were still struggling with making up our minds. I would score it a draw, honestly. Then we got a phone call from the owner's wife.

We were to not do anything to the guitar as she would be coming to pick it up. Her husband, she said, had been arrested and might be facing deportation (he is British.) We wondered what he might have done - a DUI? A bar-fight? Overstaying a visa? So we Googled his name and discovered that he had in-fact been picked up for soliciting a police officer who had presented herself to him as a 12 year old girl. He is in jail facing three felony counts and is scheduled for trial at the end of this month. She has since sold the guitar.

Awful. But at least we don't have to decide what to do or not do to this guitar.

I would say that's a win-win but for the wife, kids, and unsuspecting British public.

No kids, thankfully. And the kid he was soliciting didn't actually exist, so yea. Win-win except for her. Hopefully there isn't an awful trail of damage that he's already done...