In a recent humidity discussion on here I wondered what they did before we had hygrometers. A friend (with strong views about how to measure humidity) posted a picture of this wooden shop made hygrometer. He's very impressed with it's speed and accuracy. 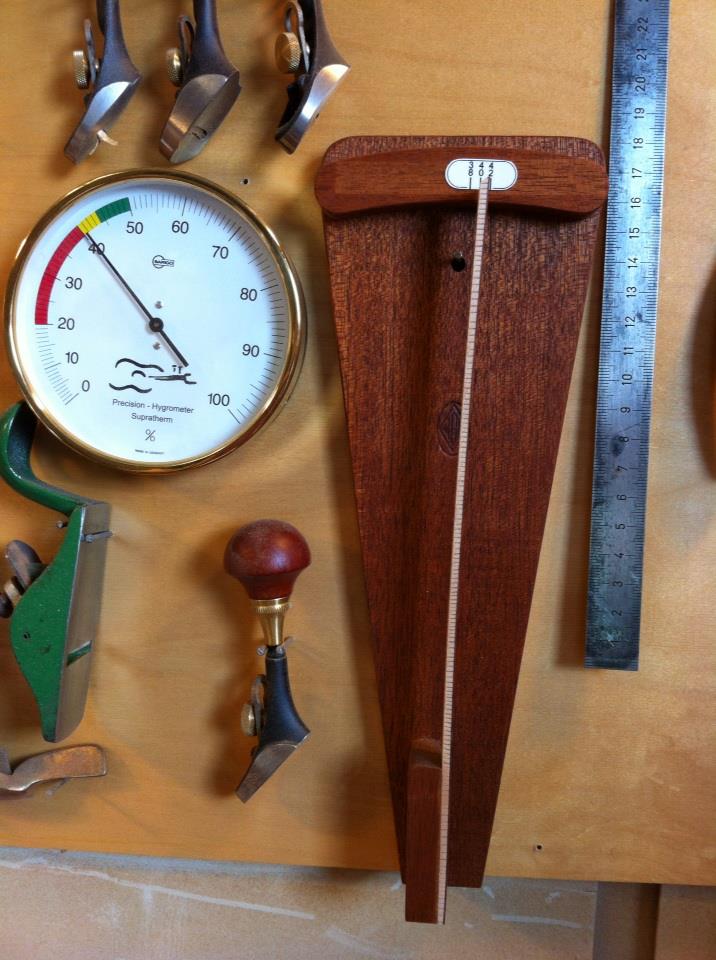 I'm not old enough... yet... to have been around during Tony's time to have asked him.  But, if I had to guess, and I hate guessing especially on forums.... I would not be surprised if Tony did much like many of the great Spanish classical guitar builders.  More specifically and as a result of these discussions in the past and in other places some of us would not be surprised if makers back in the day simply "batched" their building activities for seasonal weather appropriate for the tasks.  Even more specifically and since Tony likely did not launch weather channel.com on his quad-core I7 Mac complete with Fusion drive my guess, and it's a guess, is that gluing was not done during the rainy seasons which may mean the spring depending on where one is.

We know from documentation that many of these guys had apprentices and we also know from literature that the life of an apprentice back then was likely not an exercise in participative management, MBO, or included any of Demming's ideas including Six Sigma.  Instead apprentices were considered fortunate to have the position, get a cup of gruel a day, and not get beaten more than perhaps once a month....  So it's also likely that the Master's had no hesitation in assigning repetitive tasks, even the really lousy ones, to the apprentices to do over and over toiling endlessly with the specific assigned task(s).

With this said my bet, although I don't and can't know for sure..., is that part of the knowledge and tradition passed on from Master to apprentice was WHEN to do certain things in respect to the changing seasons.  I'll also bet that since Tony could not flip a switch on his Honeywell humidifier or dehumidifier that this dependency on the changing seasons for certain Lutherie tasks was not negotiable either.  If they did not heed the necessity to understand both wood and humidity it's also likely that a career change may have been in order eventually too.  That is after the King or Queen or Holy Roman Emperor let them out of prison or released them from the rack or stocks because the instrument commissioned and delivered cracked all to heck.... ;)

These days and when I'm building I'm also as serious as a heart attack about maintaining a desired RH (relative humidity) range.  So far the very best methods and systems for knowing what the RH is that I have found is a wet-bulb type of system (there are a number of variations), knowing how to use it, and a decent analog hygrometer that can be calibrated as needed.  And of course any tool (or instrument) is only as good as the beneficiaries willingness to use and abide by same.

The builder that posted this has been a die hard wet bulb guy for years, he feels this is faster to react and just as accurate. It's a easy build, a guy could probably make one of these in less time then it takes to write a forum post.

Robbie O'Brien who did the video is a friend of mine and one hell of a good guy too!  He's done as much to spread the word of Lutherie as anyone that I know and respect!

I've seen a number of variations on this theme of shop-made, read-at-a-glance hygrometers and they can work very well indeed.  One variation that I recall was posted on the ANZLF forum (Australia/NZ) and if I recall correctly the maker used his daughter's hair, just one, to make a very accurate hygrometer.

Beyond initial calibration one should also check the thing for accuracy over time which to me would mean checking it a week after calibrating it, a month after that, and then find a regular interval that seems to do the trick.

Also there is always going to be the issue too of "range."  Digital hygrometers, all of them.... suffer greatly from the idea that they may be fairly accurate in a specific range but they also can be WAY off outside of that range.  Although all we may care about is some variation, in most cases, of the 40 - 50%RH range I still see a hygrometer such as this shop-made one as very useful once calibrated, proven accurate in the desired range, and if it remains stable over time.

But I doubt that I could build one in as little time as it takes me to post.  I tend to post what I think, for better or worse, and it rarely takes me very long to know how I feel about most any issue.... and only seconds to usually post.

As for my RH control in my home shop it's a frequently calibrated Abbeon with a psychrometer, motorized, which is a variation of a wet-bulb for calibration.  Even a wet-bulb will take several minutes to get an accurate read, sling psychrometers are a bit faster but harder on the wrists...  And even with these very accurate lab-quality devices if you exhale in the wrong direction or someone moves in the shop you just skewed the results.

The one thing that I have learned for sure though in all of my own research with hygrometers is that digitals suck, are inherently inaccurate, greatly suffer from the "range" issue, and one might as well take a Sharpie pen and write 45%RH on the face of the things because that is exactly what they are only capable of doing - telling you what you want to hear....  One very popular maker of the Caliber III (the best digital I have tested but still lacking) in their instructions prohibits one from using a salt test to check for accuracy indicating a violation of warranty and possible harm to the device.  Must be nice work if one can get it... telling folks what ever you wish and prohibiting them from any efforts to "trust but verify...."  Not getting political, I just actually think like this.... ;)

I think this is a fun/cool idea but I can't help but wonder how much use it is if the only means of calibration is to already have an accurate hygrometer available.

In my experience, a meter is only as good as it's calibration. In this case you need to at least know the initial static RH to set a starting point and this would only be accurate after a period of acclimation. Then you need to workout out the graduation/scale of deflection on the indicator you built for it to be useful as an indicator. That would need to calibrated for both sides of the start point.

With some work/time and an accurate hygrometer you probably could work up a decent scale on this simple device, but I can't see how you could make it accurate with out already owning the very tool you're trying to avoid.

I still think it's kind of cool and I just might make one for the fun of it. I could at least mark high and low points and check them against the RH in my local forcast. Not that accurate but fun.

The video gives a good explanation of it's usefulness without a hygrometer and even with an accurate measuring system it's easier to use than a wet bulb. I like the local forecast experiment, I might do that myself.

The information ( courtesy of  Mario Proulx) on this thread  http://www.mimf.com/phpbb/viewtopic.php?f=12&t=1701 is indispensable  to anybody seeking to calibrate a hygrometer.

I'm guessing most of you guys are American. Here in the UK humidity is rarely an issue. The prevailing weather is from the southwest and southwest from us is the Atlantic, wet. Italy is long and thin and has water either side and below. It probably has fairly stable moist levels of humidity same as in UK. I like the bi-wood hydrometer design but I don't think there is much point in my making one.

You're right, Ron. Talking RH in America may be misleading to people that don't live here. In my experience, most people from your neck of the wood don't really know just how big and how diverse this nation is. In my area, RH can very from as high as 90 percent and as low as 10-12 percent and the change from "average" RH ( in the 40s ) to either can happen literally over night. I grew up in the middle of the country, 1500 miles away from here where our average RH is considered "drying up" weather.

I don't have a well controlled area to build so I have to work around the season/weather. I did a thread a couple of months back about hearing one of my project bodies "Ping"  on the stand behind me. The RH on my local " up to the minute"  forecast webpage was 15 percent and dropped to that from in the 40s in about 5 hours. I got caught flat footed because I failed to pay attention. While I writing this it occurs to me that even an uncalibrated device like this may have given me some warning. Maybe I do have more of a use for this then just a play thing.

On a related note, I've often wondered what mechanism the mechanical analog gauge hygrometers use....

It seems the earliest versions used the the expansion/contraction of human or animal hair as the mechanism.

Anyone ever open up a modern mechanical hygrometer?  Since they supposedly need re-calibrated yearly it seems as though it would be easy to take a look inside (hint hint!)...