Thanks to FF for the original idea of blasting steam away with jets of air during a neck reset!  I wrestled with trying to make a "from-scratch" version of his, but the nagging issue was already using an old StewMac neck-removal jig that's worked just fine for years... although, of course, it had no air.

So, after a few false starts, I've jerry-rigged an air-blaster that attaches (and can remain attached) to the StewMac jig ...and saved a few bucks in the process.  The plastic cable ties started out to be for temporary holding but they seem to work just fine on a permanent basis.

Nothing terribly complicated here, a capped-off PVC manifold with four 1/4" Loc-Line hoses & ends to aim at the usual suspect areas that tend to blush the finish when the steam escapes.

Haven't actually tried it out yet as I'm waiting for the next victim to hit the bench.  No doubt there'll be tweaks and adjustments, but what the heck... that's half the fun! 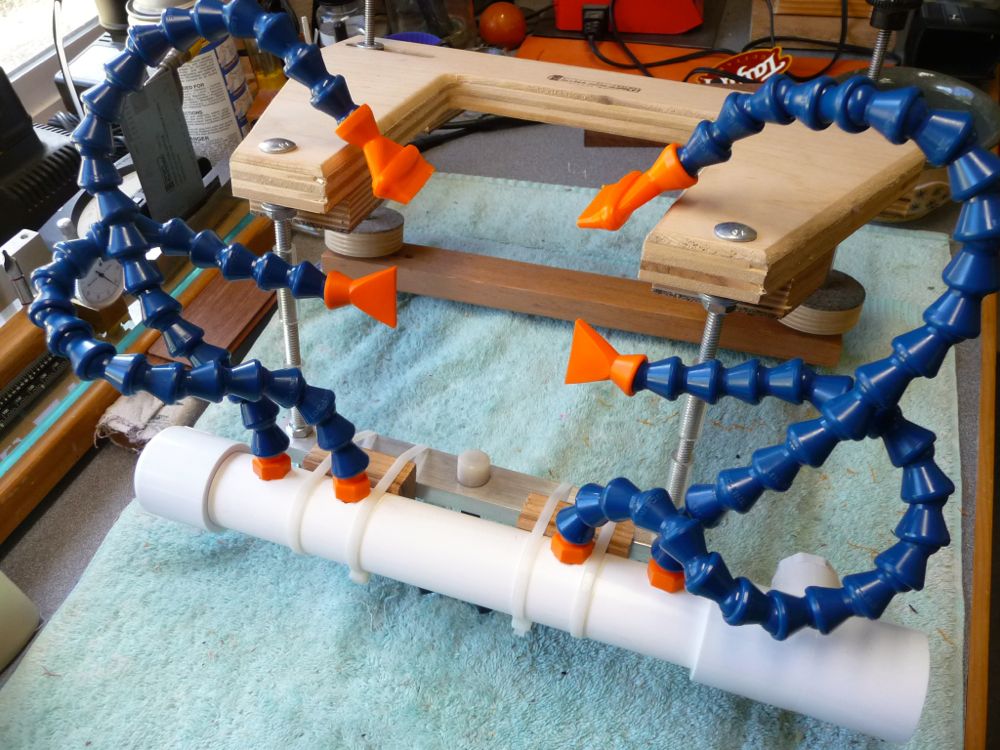 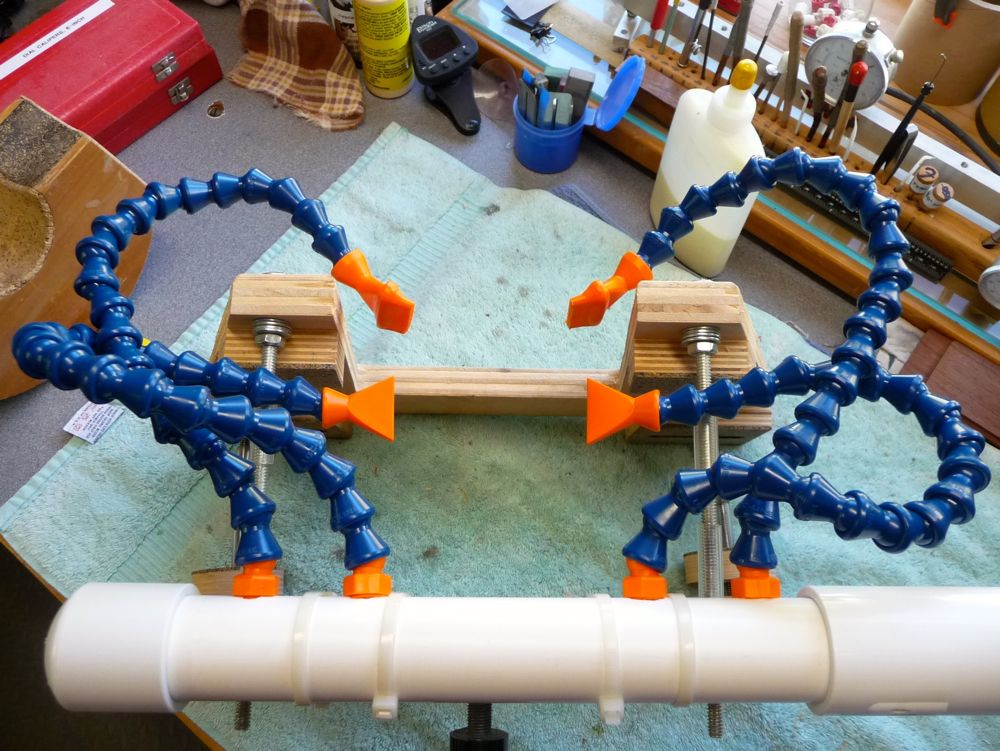 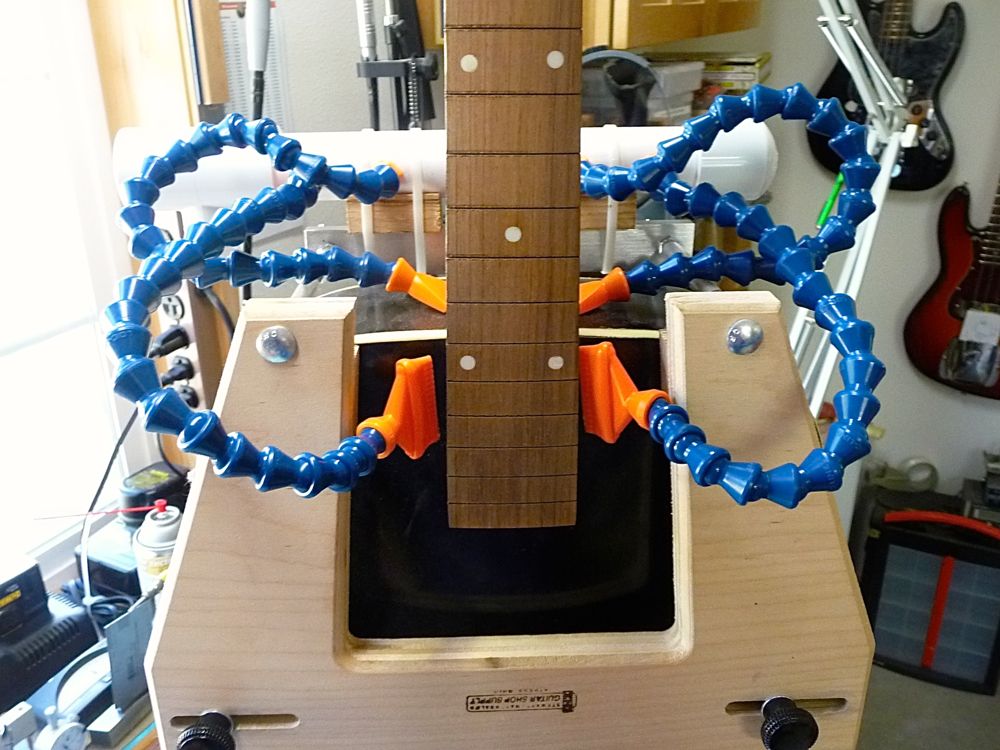 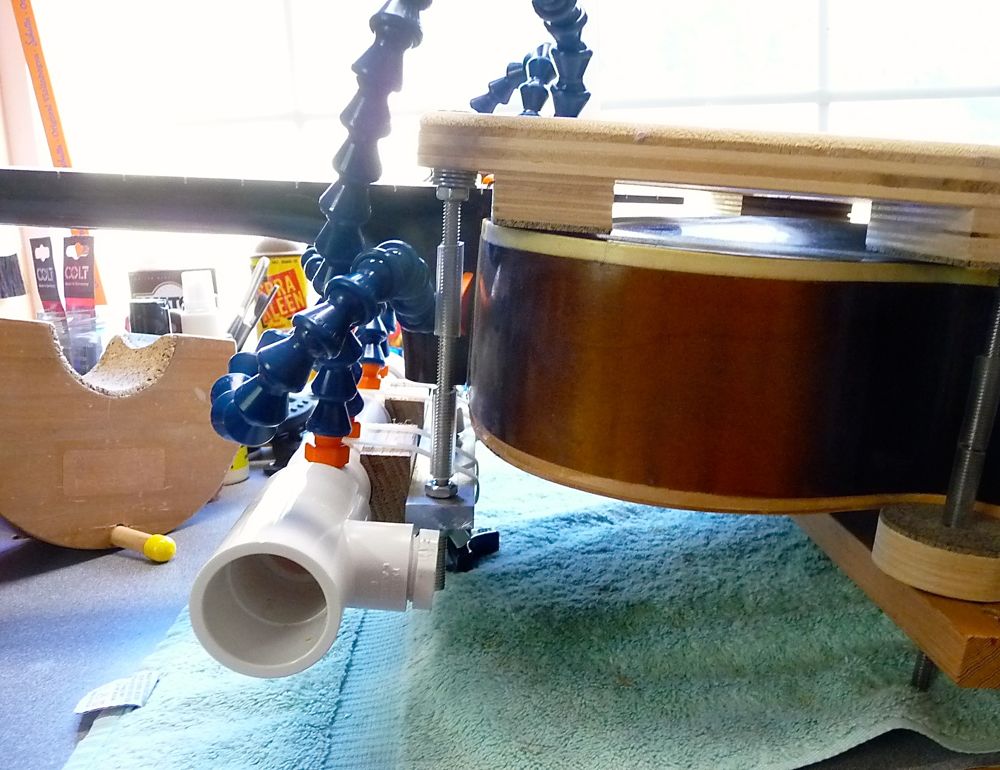 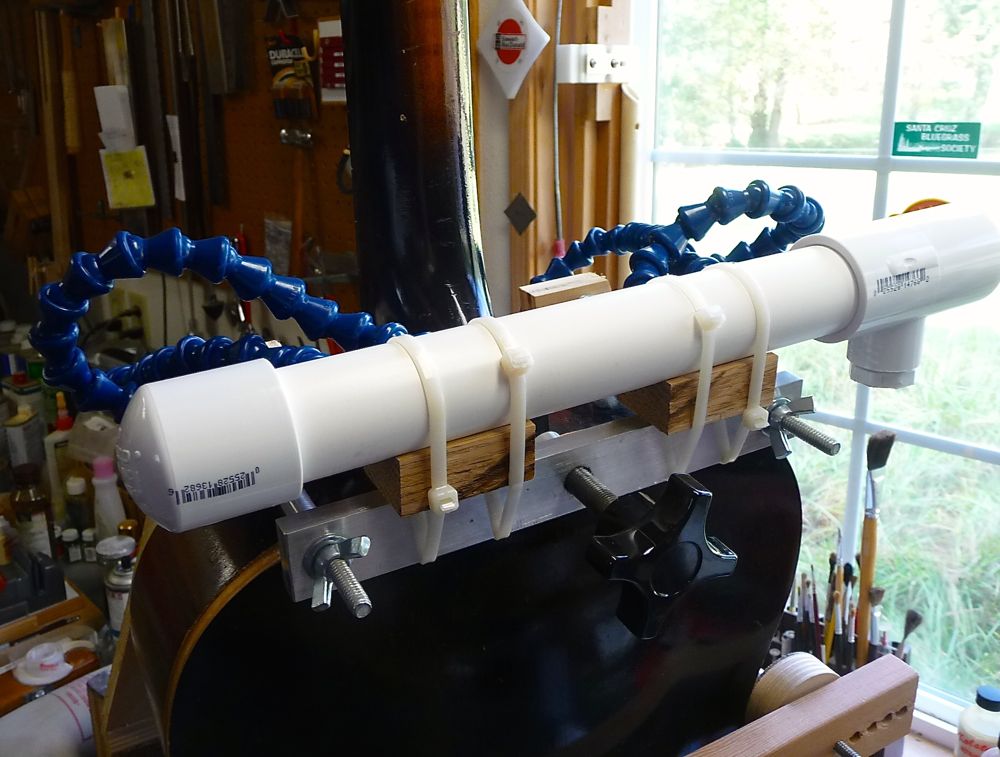 Other than perhaps having nightmares about killer octopi attacking and when we have to get on the floor and wrestle a stinkin neck off looks great to me!

PS:  Arn't workbenches with a window near by great!

What an amazing thing to build. Thanks so much for the pics! So, halloween is coming up, and maybe you can go get an oversize overcoat, strap that minorchas between the shoulder blades, after cutting holes for the tubes, and Voila! Spuderman's  Doc. Octopus costume!

Ha!  That's great, Kerry....  yes, I need to be greeting the munchkins at the door with all manner of frightening lutherie paraphernalia-!

One of the unforeseen side benefits of mounting it directly to the jig was that it can sit flat or upended, depending on how the #$% neck wants to come out.

There's plenty of air exiting the contraption, so adding a couple of additional hoses (if the need shows itself) wouldn't be a problem, either.   The best part?  The cash outlay was minimal :)

the missus was looking over my shoulder and was wondering if I've started making pipe-bombs! :)

I like DIY gizmos like this, thanks for posting, and let us know how it works when the steam is actually flowing.  Tom

Hi Bill.  The PVC, of course, is just garden-variety 1" stuff. The hoses and the ends are made by LocLine® and are available on Amazon and also most supply houses that cater to machining. The primary use for that stuff is to direct streams of cutting or cooling fluid to parts being machined on mills, etc.

I've also made-up a small-parts soldering jig with it, since it bends into position and holds nicely. It's easy to affix alligator clips to the ends...  great for being a "3rd-hand" when soldering pots and components.