This is something that bothers me every time I restring. So: a lot! I really dislike stabby little string ends sticking out of a capstan. In the past, I used to kink the plain strings and fold them in on themselves, but it's too fiddly and slow. Now I just clip them short and hope for the best.

I thought I'd found a neat solution when I saw a video on Stewmac (http://www.stewmac.com/How-To/Trade_Secrets/Evan_Gluck_pro_guitar_r... - starts at about 5:00) where Evan Gluck just snaps the strings off, but I've no idea how he gets that to work as the string works its way out of the eyelet whenever I tried (has anyone got this trick to work?)

What do you chaps do? And don't get me started on nylon strings...

Repair folks tend to hate how most players (and many repair folks....) put stings on....  What I hate the most is when someone leaves about 1/4" of string sticking out of the hole and pointing upward.  Go to cut the nut slots or even check them during triage and your puncture your hand on the string end.....  Damn when was that last tetanus shot....;)

Evan is a personal friend of ours and what he's doing works great.  We don't do exactly what he does though.  We use drills and always have and Dave can even tune with a drill.  And yes we have discussed marrying a drill with a tuner so that we can tune with a drill and the drill automatically stops when it's in tune.  That's on the drawing board if we think that it's actually useful for us.

But I digress.  We leave about 1/8" of string sticking out and in the same direction as the hole.  It's too short to stick anyone, not tied in a "stupid, unnecessary..." knot and permits rapid restrings when necessary.

Most of all the knots that you see are NOT necessary.  We have likely put on tens of thousands of sets... of strings always doing as I describe above and what Evan is doing sands the breaking off flush with the hole.  Not a single string has ever come loose be it a famous rocker, a getting famous rocker on a national TV show a blue grass player with mediums and a heavy hand or a mando or even a banjo.

The knots including bluegrass knots are not necessary.

Modern tuners have tapered posts and are designed for string tension to cinch the string wraps upward to bind with the sting passing through the hole.  Draw it out on paper you will see the mechanical genius and simplicity of the design.  The cinching of the string passing through the hole (both ends for us since we leave 1/8") has held no matter what for us with no exceptions.

Not sure if Evan's single hole cinch would work as well but since he's doing it my bet is that it does.  Evan knows his stuff and is a master of his very tough and intolerant NYC market.

Btw, I hope I never implied that Evan's method was flawed, but just that I couldn't get it working for me. I really love his setup and the work he does in such a small space.

I do them his way because the hook holds the tension constant almost instantly--almost no re-tuning after the first windup.  It's particularly effective on the unwound strings which tend to slip more while they settle in.  Some Waverly posts aren't tapered, either, so on my mandolin it works even better.  Before I did this, I used to re-tune a lot in the first couple of hours after restringing.  Fewer wraps are needed, too.

I trim very close after stringing to avoid punctures and to allow quick unhooking when changing.  the only hangup is on my archtop where the strings feed through a hole in the tailpiece and the hooked end is difficult to pull through and without straightening, can mar the cross barg.  Then I cut the string with my dedicated string trimming diagonals--retired from other work because they are already notched.  Or you can use Craftsman pliers as Frank does--guaranteed for life (which these days may be the possibly short life of Sears...).

That's the on I use. But only for the unwound strings.

There was a time when tuner shafts weren't tapered and that's when "Bluegrass Locks" and other sorts of knots or wraps were necessary and important.  But with modern, tapered tuners that's not the case anymore and again we've never had anyone capable of slipping the wraps wound as we do again on tapered tuning posts.

Regarding holding tension constantly that's what we get too.  If you mean eliminating string stretching knots actually leave more string on the post and strings will still stretch as they always do and not only in the tuner post region.  Its always a good idea when doing this commercially or even for yourself to stretch the strings a bit after tuning to pitch with new strings.  I stretch them each pulling them out like Robin Freaking Hood... and holding for about 5 seconds and then retuning to pitch.  Lots of ways to do this and what I'm doing is slower then most other methods that I'm aware of but I tend to suffer from chronic dry hands from being Felix Ungar and washing my hands every time someone shakes my hands.....  I hide it of course and wait for them to leave but I likely wash my hands 30 times a day......;)  Can you imagine the Catch 22 I have cleaning fret boards as I do.  ;)  People pick their noses or worse... and then play their G*bson.....  Of course Martin players don't pick our noses....  :)And you think I'm kidding.....

Anyway lots of ways to do things.  I would challenge anyone here to wrap string around tapered tuning shafts leaving about 1/8" or so poking out the other side of the hole.  Do it for a year and report back.  We've never had one slip regardless of the gauges or style of music.  It's also WAY... faster both going on and especially coming off AND less chance of poking yourself when you don't have to untie someone knot nightmare.

"We leave about 1/8" of string sticking out and in the same direction as the hole.

The knots including bluegrass knots are not necessary."

what do you mean by "the same direction as the hole"? do you mean left sticking straight out, or is the leftover bit bent before cutting it short?

and what is a "bluegrass knot"? is that the traditional martin-style wind, with the string coming around the back from underneath and hooking over?

FWIW i did the martin-style "lockover" thing forever because that's how i was taught in my younger days, but in recent years decided to actually compare the different methods for myself. i found that just straight-up putting the string through the hole and turning the key to wind the string three or four wraps down the post was every bit as solid, easier to remove, and easier to teach people.

OTOH the trick where you wind one wrap over then the rest under was slightly less stable, it seemed to take a while for the slack from the gaps to get fully taken up.

these days i do the "Z bend" thing where both directions of string are bent sharp against the post before winding, followed by cutting it as short as my flush-cutters will reach. two sharp bends in a steel string is as anchored as you'd ever need it to be.

ironically, the one good thing about the lockover method is that if you pull the leftover string up sharp then cut it right where it lays against the top of the post, literally resting your cutters on top of the post to make the cut, the resulting string end is left sitting against the post and not poking out above it, resulting in a reasonably "safe" peghead. 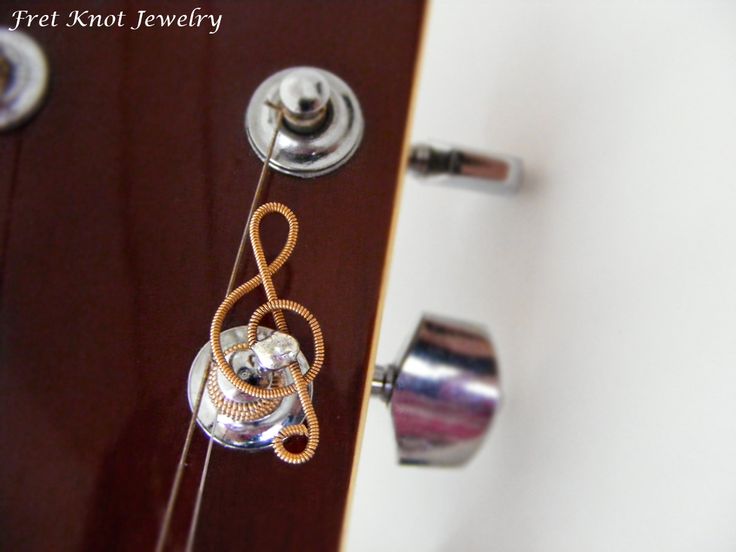 For the two unwound strings I wind the leftover string the other way around one circle around the post, under the string and up to really fasten it with the string the next turn of the string post.

"I thought I'd found a neat solution when I saw a video on Stewmac (http://www.stewmac.com/How-To/Trade_Secrets/Evan_Gluck_pro_guitar_r... - starts at about 5:00) where Evan Gluck just snaps the strings off, but I've no idea how he gets that to work as the string works its way out of the eyelet whenever I tried (has anyone got this trick to work?)"

are you doing the bendy trick once you're tuned up to pitch? i have a hard time believing a steel string would "slip" once it was wound several times around the post with the one sharp bend through the hole and fully tightened up.

you're not trying to wrap the string around the post by hand and then stick it through the hole are you? that never works right.

Permalink Reply by Frank SIlano on June 24, 2017 at 9:46pm
I do the lock wrap think Iike Frank describes. I have been doing it for so long it is engrained in my brain and it would be harder not to do it lol. I will try just the standard wrap on some of mine and see if tuning stability changes. BTW I do the thing where I cut the string flush to the top of the pot with my flush cutters. It's not a perfect solution but its better than not. I am also a diabetic so I already have enough of the blasted finger pricking going on lol. :)