A fellow brought me a 70's-vintage Aria 12-string acoustic, mod #6822, with a bolt-on neck and a trapeze tailpiece. The neck is bolted-on via 4 long screws on the rear, accessed via a plate.

The job was to replace the broken tailpiece with a new one, restring the guitar and adjust the action as needed. On arrival, the strings were off and I'd noted the top was 'wavy' near the neck but chalked it up to sitting for a few years, strung-up, in the case.

The work was done and all seemed well. The neck was shimmed up a bit and a taller saddle installed as there was minimal string-break over the bridge.

After 3 or 4 days with nothing seemingly amiss, I casually checked the tuning again and found the action had gone crazy-high, the rosette had split-open on the bass side and there was obvious further buckling of the top around the neck. There's also some sinking under the neck on the side.

It seems as though the neck block may have slipped under the string tension and moved some top bracing in the process.  Arrrgh.

So the question is: would the major repairs involved be worth the effort? I have visions of having to remove the top, reglue the neck block & bracing ...but possibly also having to make a new top, considering the damage already incurred.

The customer is also a friend and I want to give him the best advice possible. Right now, I'm inclined to tell him it's time to go guitar-shopping, knowing that he'll ask about the feasibility of repair.

All thoughts and opinions appreciated!  Haven't even take the strings off yet. 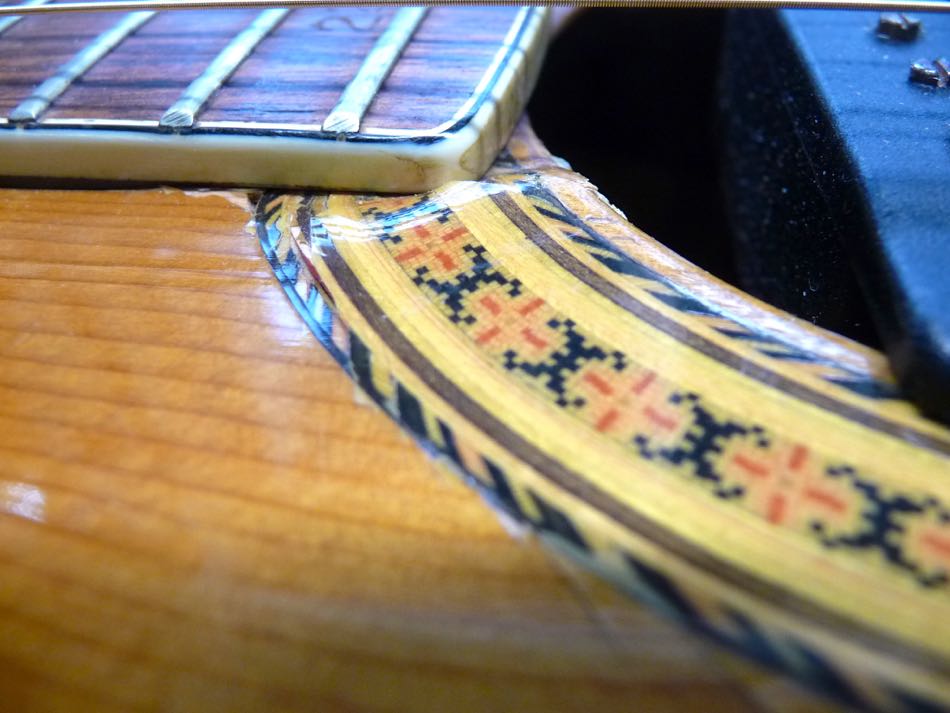 You can take the neck out and get epoxy in the gap around the block , then clamp it back where it should be . Its an unrewarding job on a crap guitar however . Id hang it on a wall .

Permalink Reply by Thomas James on November 26, 2017 at 6:41pm
This joint design is not worth repairing in a time vs money world. I agree with wall hanger status.

These were disposable guitars right from the get go. After working on 3 or 4, I stopped accepting them for repair. I'd hand it back to the customer  and be done with it before you start.

You can't polish a turd.

Yeah, the picture is starting to become clear on what to do with this thing!   Many thanks for chiming-in and confirming what I'd suspected from the start.

I'll let the owner know that the amount of money necessary for repairs would be better spent in shopping for a decent newer 12-string... and everybody will be happier in the long run.  Thanks again.

Yep - don't even think about it.  Tell him to buy a Seagull

Made in Italy?  It looks a little like an EKO that I bought in Italy in 1967 when I was away from home and needed a guitar, cheap.  Same neck attachment but sounded like a plank (and not Les Paul's Plank).  It held together for a number of years and I played it occasionally never disturbing the neighbors because it was't loud enough.  Around '89 most of the tuner buttons cracked and fell off.  I put a couple of sets of Schaller Mini's on it and kept it a little longer.  The bridge then pulled off, even though it was also bolted on.  Got that re-glued and re-bolted. 3 or 4 years later, the re-glued  bridge stayed glued but the laminated top delaminated.  I was using a much more qualified repairman by then and he and I agreed that it was toast.  It should have been totaled before the tuner buttons died.  We removed the tuners and he graciously deposited the guitar in his dumpster.  I traded the tuners to him for some work needed on another guitar I had--a guitar worth saving.

I learned a lot but it took some tries.

An outsider would think this "blanket beating"  of a guitar is a little over the top - I recall a previous thread that dealt with this style of guitar and having used half the worlds supply of carbon fibre and all our resources to fix one of these things I can only say that time has a way of validating the forum position.

So, how do we stand with the raft of Chinese/Korean sausage factory guitars that are lining up to be the next generation of repairers nightmares.   What I am seeing across the bench lately is a game changer:   Beautiful looking instruments, great finishes, but made of such poor material as to be hardly fit for firewood,   The price structure of these instruments will no doubt deliver a death blow to many of the middle order makers and businesses that try to compete and by the time the "scam" is fully revealed it will be too late for the quality makers  forced out of business.

However, I suspect I am preaching to the converted,   We provide firm guidance to our customers these days regarding the need to buy quality - not necessarily our guitars, but any guitar that will be suitable for passing down to the next generation as opposed to passing into the fireplace.

Modern glue, laminate wood and plastic lacquer may make a nice looking guitars. But I consider them disposable products like so many other things are nowadays. I wish quality was as important as the price...

Plastic lacquer kills the tone in otherwise decent guitars with good solid woods. What a waste!

Not looking good. If it's dumpster time, save all the loose usable vintage parts. If it's solid wood somewhere it will get useful for repairs, aged bindings can be useful too :-)